Behind the booth with EDC lighting designer Steve Lieberman 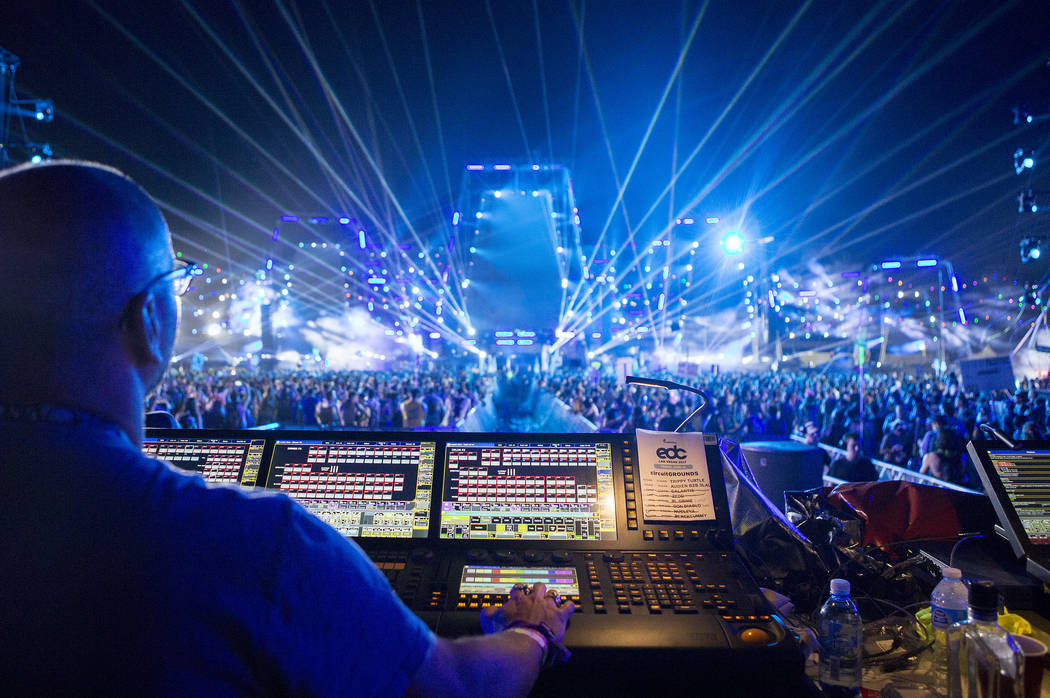 At 3 a.m. on Friday night of Electric Daisy Carnival, Steve Lieberman stands in front of three computer screens and a control board. Beyond his platform is a sea of revelers, bathed in red light, and beyond that, EDC's Circuit Grounds stage rises in a semicircle of nine 80-foot tall video screens. On a parallel platform a couple of hundred yards away, DJs Audian and 3lau perform a back-to-back set.

Alongside Lieberman works a team controlling the lasers, pyrotechnics and video screens, while Lieberman alone controls the thousands of lights that flash each millisecond.

As he pulls back on a couple of the many faders, the dashes of light around the video screens switch from red to blue. In time with the screeching beats, Lieberman releases the faders, the lights flashing back to red simultaneously.

The largest dance music event in North American takes place "under the electric sky" for a reason. Lasers, flashing neon lights and fireworks assail attendees' senses from all sides from the moment they arrive at Las Vegas Motor Speedway. And lighting designers like Lieberman and his team are responsible for setting the mood.

Though months of preparation lead up to this night — Lieberman and his team at SJ Lighting designed the Circuit Grounds and Neon Garden stages from the ground up — when the DJs perform high above the crowds, Lieberman is mostly improvising. Because of the number of DJs and tracks played each night, he doesn't know what songs they'll play ahead of time. Creating the light show is mainly instinct, not that he seems to be stressing about it behind the booth.

Lieberman has worked with Insomniac, which produces EDC and other electronic music festivals, since 2001. In that time, he's seen the festivals grow exponentially, in terms of attendance and scale of production. Within that semi-circle of video screens and light fixtures, Circuit Grounds can accommodate 40,000 attendees.

"What we spend on Circuit Grounds for this show is probably twice as much of what we spent on the entire production for Electric Daisy Carnival 10 years ago," Lieberman said.

And that's just one of seven stages at the festival. Elsewhere at the speedway, lighting designers behind similar control boards create electronic shows for tens of thousands of others under the electric sky.