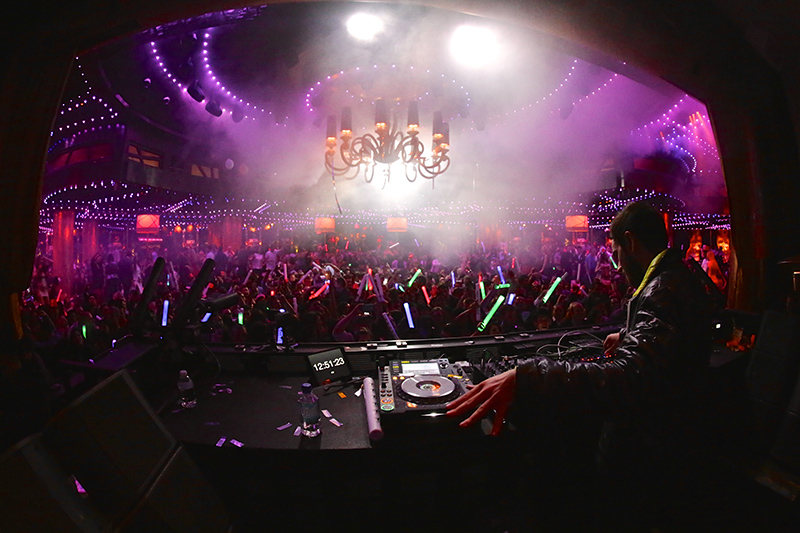 The XS Nightclub at Encore at Wynn Las Vegas has been named "best nightclub in the United States" by revenue an unprecedented five times in the annual Top 100 listing by Nightclub & Bar magazine, the bible of the bibulous.

The very upscale venue, according to published reports, grossed in the vicinity of $105 million last year from its nightclub and corporate special events. Its high-rolling patrons have reputedly run up tabs of more than $25,000 for a night's tickets, table and tippling. Celebs like Katy Perry, Nick Jonas and Mario Lopez have been spotted at the club, the Strip's epicenter of the electronic dance music scene.

At this rarefied level, there is a lot of pressure on a club at the pinnacle to stay there. Night lifers pay not just for goods and services but also for an immersive, potentially life-altering experience. That means featuring star DJ talent like Avicii, Kaskade, Diplo and Skrillex (often at six-figures-per-gig fees), mythical mixology, spinespinning sound and synapse-sizzling lighting design. This is not eye candy; it's a 40,000-square-foot sensory banquet of gold chandeliers, gold leaf body forms on the walls, crocodile-embossed leather, furnishings you can dance on, 14,000 individual light sources, video walls, crowd-scanning lasers and rooftop pyrotechnics.

To get top looks, you need a top lighting designer. Enter Steve Lieberman, the founder and head of SJ Lighting and a Parnelli Award nominee with a litany of more than 200 club installations on his 20-plus-year résumé. A graduate of the University of Arizona with a major in history and minors in political science and philosophy, he knows as much about Kierkegaard as kabukis. Jesse Waits, managing partner and co-owner of XS, chose him for the nightspot's $10-million, two-year technological renovation, which was unveiled before thousands of patrons New Year's Eve.

"When you're working on a property," Lieberman explains, "the first level of detail is the interior design and the shape of the building [the curvy shape of XS is said to mimic the human form, so be careful where you sit]. Though you have to be creative and come up with things conceptually that work for the room, the architecture and geometry of the space are the first priority in dictating the scope of the actual package. After meeting with Jesse to discuss ideas and get started, we got architectural backgrounds from the Wynn Design Development group, which handles all the architectural work, design, structural and safety details and documentation that goes into producing any Wynn property. For installations, we do our design work on AutoCAD. For modeling, we'll sometimes use SketchUp, LightWave, Maya or Vectorworks. We did all the design documentation and provided the systems. At my shop in Los Angeles, we prepped the equipment, tested it and did a pre-build. Then it was shipped to the location for installation by the local electrical techs. We came in for the final turn-on, programming, integration and any servicing needed."

The XS makeover happened in three phases. In the first, SJ Lighting designed a new booth to launch the long-term residency of famed producer and DJ David Guetta. "It's a double-sided modular design that enables the DJ to stand facing into the club or out to the patio area," Lieberman explains. "The approximately 16-by12-foot rectangle is surrounded by 3D video on all sides. Extra pieces can be clicked onto the base to make it an oval shape. Hi-res video bands surround it, with low-res LED and brass elements between the bands. Hanging above the DJ are four-sided video cubes, so as people walk past or around the booth, they don't see the back of a video screen, just continuous video. At about a half-million dollars in materials and fabrication, not including installation, that was a significant part of the job."

The second phase was the overall club renovation, with a completely new lighting design over not only the dance floor, but also out to the outer perimeters of the room, as well as the addition of detail and theatrical effects to the pool area. "That's a big revenue generator for a club," says the lighting designer, "especially during the summer, when there are parties by the pool and night swims. We added LED video walls to the exterior fascia of the walls, new LEDs over all the landscape and pool, digital festoon lighting from the palm trees to the island bar and many other details."

Phase three, just finishing when we spoke in April, was the installation of 80 panels of exterior video screens and a double kabuki drop for doing reveals. The curtain is held in a diaper near the ceiling and not visible to the audience. The first release drops the curtain down to cover the DJ; the second reveals the DJ and stows the curtain into a hamper.

Though dazzling, the project's real innovations were behind the scenes, says Lieberman. "For example, there are curved beams that meander through the venue. We took Color Kinetics iColor Flex LED color-changing strings on one-foot centers and lined each side of every beam throughout the venue with them, which ended up equating to 256 universes worth of control channels just in LEDs on the ceiling."

There were other important pieces of gear that Steve relied on to illuminate the sexy structure of the room. He incorporated the Chauvet Nexus Aw 7x7 LED panels into the design. He positioned 80 of these pixel-mappable panels throughout the nightclub. The non- abrasive, tungsten-simulated light that comes out of these panels is easy on the eye, yet they pack a punch when needed. Elation Lighting was well represented in the design with a plethora of lighting and strobe fixtures.

Global Trend Productions, another Vegas veteran and the U.S. distributor for the manufacturer Oracle LED Systems, was SJ Lighting's video LED supplier on the XS job. "Their product is great," reports Lieberman. "I trust them implicitly, and they had a relationship with XS from a previous project that made things easier." (See PLSN, "Company 411," July 2012). Recalls GTP's CEO Isaac Campos, "We did the specs, then worked closely with Oracle to redesign one of their standard rental panels into an installation panel. We made it front-access and doubled the size of the frame to make it cost-effective. We also improved the power consumption and modified the heat distribution to withstand the Vegas heat and eliminate overheating issues. We provided 240 Oracle TR three-by-three-foot 8mm LED panels and installation frames for showing high-res video content on indoor- and outdoor-facing walls. During the day, when the venue serves as a pool club for the hotel, the walls facing the pool show sporting events and other general interest shows. When the nightclub is open, it's EDM-related content, including what the celebrity DJs and VJs bring in of their own." Global has also supplied LED panels for the nearby Wet Republic pool club at the MGM Grand and the Bond Bar in the Cosmopolitan, LED video installations at the Marquee Day Club and Tao in the Venetian Hotel, and a high-res, 3mm carbon fiber, curved DJ booth in the Marquee's main club.

A short, fast-motion video of the finished XS club, shot by Mike Reilly, is at plsn.me/XS-Lieberman-Oracle.

Concludes Lieberman, "I think what we did at XS was right for the space and really beautiful. When it comes to design, it's important that everyone coming in has a good experience no matter where they are in the club. We want everybody in the venue to feel like a participant, not like a spectator."