Steve Lieberman: The Man Behind the Lights at EDC Vegas 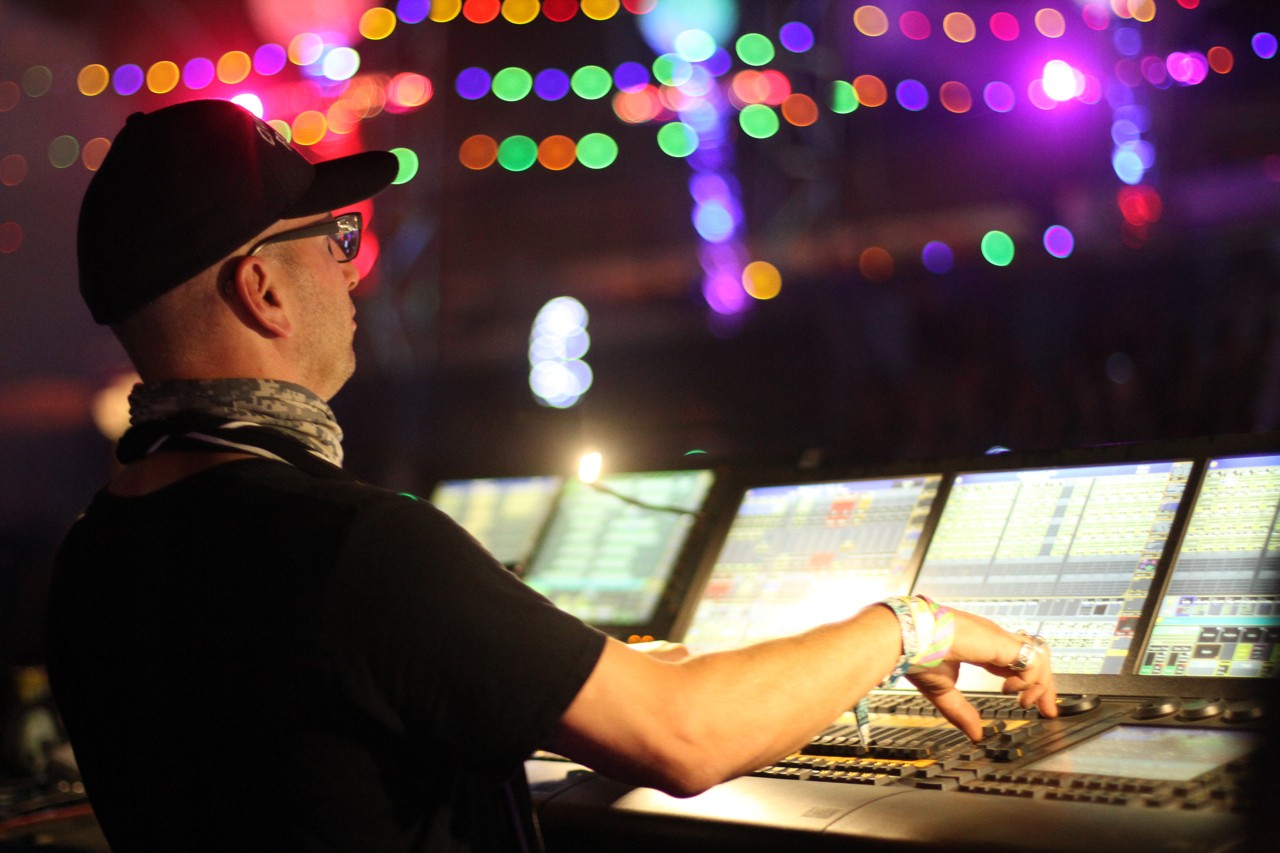 Steve Lieberman at his lighting control board at EDC's Circuit Grounds stage. Photo by Marco Torres.

It's Friday night at EDC Las Vegas, and at the Circuit Grounds stage, as is the custom at all of today's EDM events, the crowd is facing the DJ booth. There, high above the tightly packed dance floor, a Russian DJ named Arty builds the music to a frenetic crescendo, as giant video screens surrounding him flash blue and white and dozens of spotlights slowly pan over the crowd.

Behind the dancing throng, in another booth, Steve Lieberman pauses from his work controlling all those lights and video screens to pop open a bottle of 12-year-old Glenlivet. He clinks the bottle against the red Solo cup of one of his assistants, takes a swig, and sets it down just in time to cue the lights with Arty's bass drop. Flashing lights illuminate the entire crowd, which proceeds to go wild. Grinning, Lieberman cues up more lighting changes, on a control panel as complicated as the cockpit of a 747.

For 15 years, Lieberman and his company, SJ Lighting, have been Insomniac's go-to partner for stage and lighting design. Up until last year, Lieberman was responsible for most of what you saw on EDC's multiple stages. "For years past, I designed every single detail of Electric Daisy Carnival, Nocturnal Wonderland, Beyond Wonderland," Lieberman says. The native New Yorker, who usually speaks in the rapid-fire patter of a three-card Monte dealer, pauses between words for emphasis: "Every. Single. Detail."

This year, however, he's focused on just two stages: Cosmic Meadow, which will host such big names as Moby, Pretty Lights and Flosstradamus, and the smaller (by EDC standards) Circuit Grounds, where Lieberman plans to spend most of the festival, running the lights. "Now it's kinda nice, 'cause we have a bigger team," he says. "We all participate. It feels more family oriented."

To call Cosmic Meadow and Circuit Grounds gargantuan would be an understatement. Cosmic Meadow alone has over 4,500 video tiles covering the surface of a structure 90 feet tall and 400 feet long. "The money we're spending on Cosmic Meadow is probably three times the budget of the show 8 years ago," says Lieberman, who designed the lights for the massive installation. To be clear, by "show," he means all of EDC. 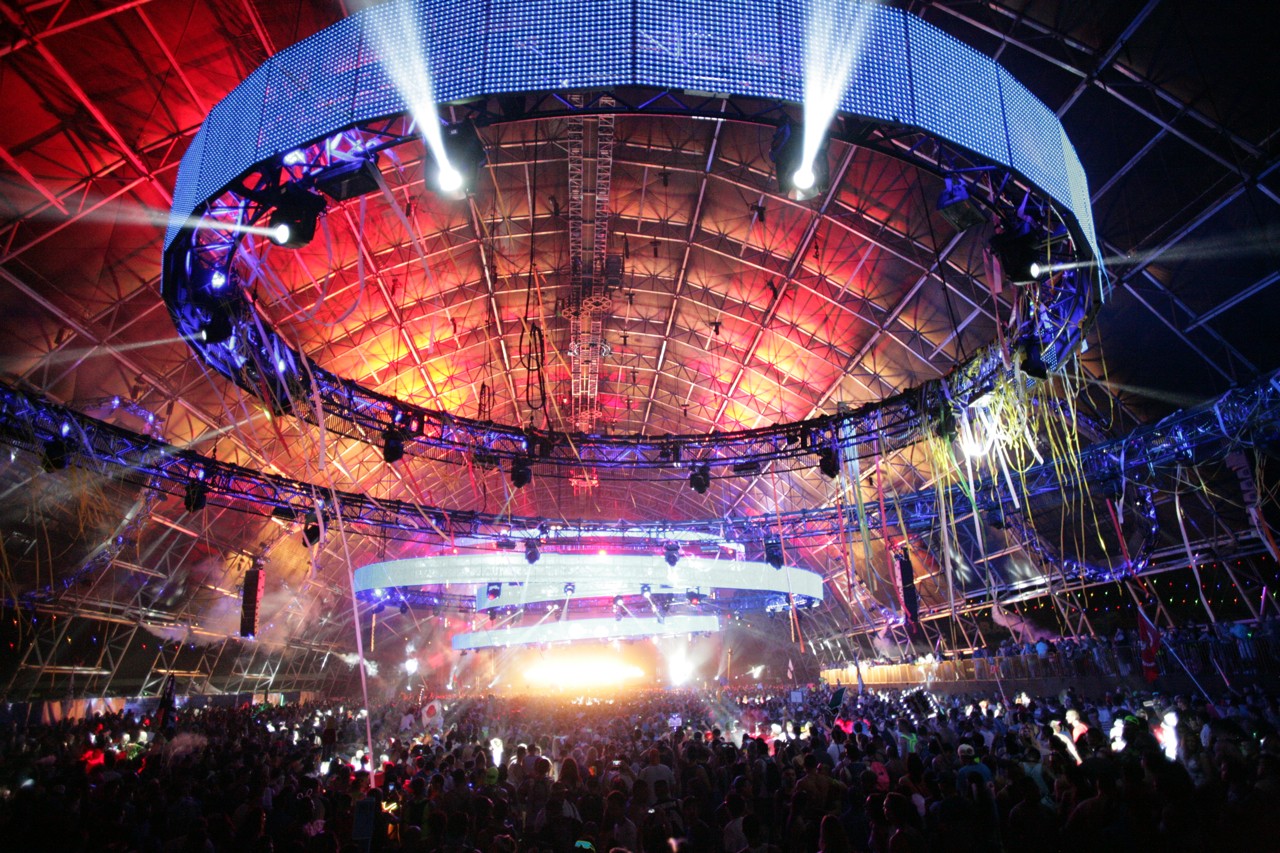 The Circuit Grounds at EDC. Photo by Marco Torres.

At first glance, Circuit Grounds, inside a Quonset-hut-shaped tent, appears less imposing. Then three sets of circular lighting and video elements suspended from the ceiling start tilting on their axes and spouting streams of confetti, and you realize that Lieberman, who designed all of the space's production elements, has pulled out all the stops.

From an early age, Lieberman was drawn to club culture. One of his first jobs was working as a bar back at a nightclub in the Hamptons in the late '80s, "cleaning glasses and scrubbing the floors. Whatever it took to be inside that venue." Later, he discovered underground parties like the legendary Storm Rave events thrown by techno DJ Frankie Bones, and was instantly hooked.

Those early parties "weren't really legit," as he tactfully puts it. "I remember we broke into a building in Manhattan," he says. "And there were some dilapidated cars inside and we were jumping up and down on them when the fire department walked in and tossed us all out. I don't remember where we ended up after that, but I'm sure we found a place to go."

In those early, renegade days, the sound system was everything; lighting was virtually non-existent, decorations an afterthought. Even when Lieberman started doing lighting for dance music events in the mid-'90s, it was uncharted territory. "I'm not gonna say I was the first one to do it, [but] I'm the first one that I know of."

After a brief sojourn in Phoenix, where he started his first proper lighting company, Lieberman sold that business to his partners ("It was either go crazy, kill them, or leave … so I figured leaving was probably the best") and moved to Los Angeles in 2001. He had formed some connections with local promoters, including Insomniac, by doing one-offs with specific artists playing L.A. shows.

He tells one story in particular, about his first time doing lights at the old Circus nightclub when it was home to Giant. "I was doing lighting for a band called Digital Assassins. They flew me in, I brought in a light package, and I got to the club and there was nobody there. And me being the impatient motherfucker that I am, I decided to just go over to the electrical panel, unscrew it, disassemble it and tie in my power without asking. So after I literally had their panel disconnected, and I am running my own wires and putting my own breakers into their electrical panel, their technical director, who to this day is still one of my close friends, walked in and proceeded to tell me off. And me being the stubborn ass that I am, I told him what he could do. So that's how we started off."

Despite that rocky start, Lieberman would go on to design lights for Giant at its next home, the Park Plaza, and for massive one-off events like Together As One, the New Year's Eve party Giant co-produced with Insomniac and Go Ventures at the L.A. Sports Arena. Soon after that, Lieberman was designing stages and lights for EDC, helping transform it into the biggest and most visually over-the-top EDM festival in North America.

These days, in addition to Insomniac's many festivals, Lieberman does design work for Miami's Ultra and a few other international festivals. Plus, he adds, "we build between 10 and 20 nightclubs a year," all designed and tested from SJ Lighting's headquarters in Westlake Village. To keep up with his crazy schedule, the self-described "obsessive-compulsive neurotic" is in the process of getting his pilot's license so he can fly himself to gigs.

But as much as loves production and lighting design, it's working the controls at a festival where the 42-year-old seems most in his element.

"Part of the joy of what I get to do, the privilege of being involved in these events, is the fact that, even when I'm at work, we're jumping up and down, we're having a good time, we're enjoying the music, and we're really participating in the show." 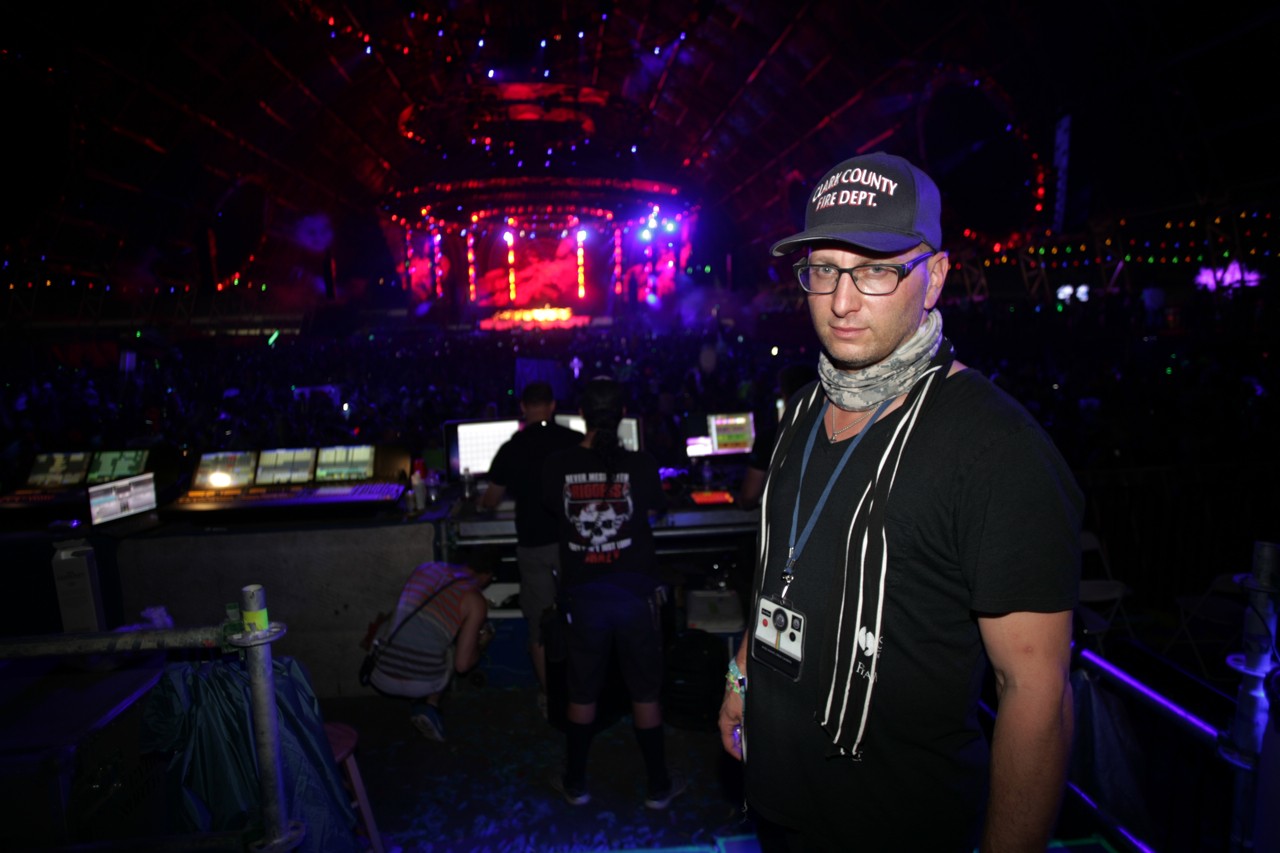 Lieberman has been running lights at EDM events for so long that, to the untrained eye, it may appear that he's working off a rehearsed cue sheet, or even that his lights are somehow triggered by sound. But really, he's just had two decades to perfect his timing.

As a designer, Lieberman's job is to dazzle. As an "LD," or lighting director, manning the controls, his job is to be such a seamless part of the experience that he becomes invisible to the fans. "When they watch that show, things need to happen at the appropriate time, at the exact time. It can't be a millisecond early, it can't be a millisecond late, because then it looks like a miss. They notice that more than they do when it's perfect."

So the crowd may keep facing the DJ, and watching the lights instead of the man running them, but that's how it's supposed to be. Steve Lieberman will be in the booth at the back, sipping his Scotch and blowing minds.