SJ Lighting's Steve Lieberman: The Wizard Behind the Curtain 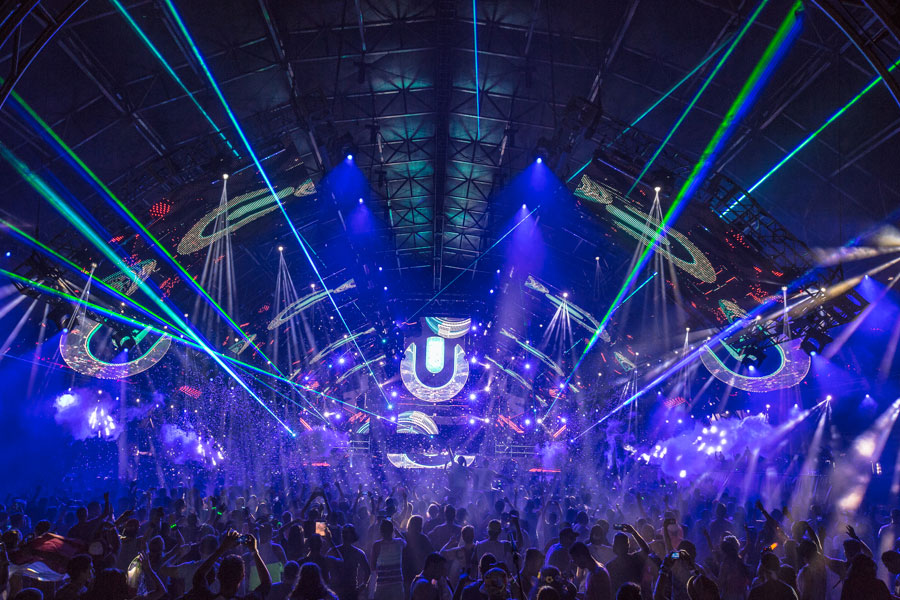 If you've danced at a nightclub or festival in the past 20 years, there's a high chance you've experienced the jaw-dropping work of SJ Lighting founder Steve Lieberman. Having worked in nightclubs since he was just 16 years old, Lieberman has played in integral role in the expansion of electronic music as a live experience. His portfolio of work reads as a hit-list of some of the biggest clubs–XS, LIV Miami, and Lavo NYC–and events–Ultra, Coachella, and Escape from Wonderland– of the dance music world. The stage design maven caught up with us to talk about what went into his most recent work on Electric Daisy Carnival Las Vegas this past June as well as his memories about his toughest installation ever.

How did you first discover and become interested in the electronic music scene?

I've always been fascinated by nightlife culture since early on in my teen years. My first job in a nightclub was in 1987; I worked as a barback at a club called La Plage in Hampton Bays, NY. Throughout high school and into my college years, exploring nightclubs became a weekly adventure. House music was the prevailing genre at the majority of the clubs and has always held a special place in my heart. Around 1990, I was first exposed to rave culture. Back then, the Storm Raves were playing hard techno at warehouse and underground parties. All of these experiences became "historical" milestones for me and set me on the path of where I am now.

What led to your founding of SJ Lighting?

SJ Lighting was just another incarnation of my career throughout the many years and various cities that I've lived and worked. When my wife and I moved to Los Angeles, we had just recently left a partnership in another company and needed to start fresh. I had the idea of naming the new organization Mediocre Lighting. However, my wife didn't think that was a good business plan. Instead, we decided to go with something a little more conservative: SJ Lighting (since SJ are my initials).

How did you first begin lighting design?

When I was living in New York in the mid 90s, I was operating lights in nightclubs nearly seven nights per week. Additionally, I was working on special events, programming jobs, service jobs–anything to keep income on the positive. Around the beginning of 1996, I had an epiphany: if I continued to operate lights in the nightclubs, I was going to reach the limits of this career path very quickly. I had higher aspirations. I was always envisioning and drawing lighting designs in my head, on paper, and in AutoCAD (R12). I decided to stop being a full time operator at night and started actively pursuing design work specifically for nightclubs and bars. The work came in slow and it was a real struggle at first. I would literally knock on the doors of clubs and bars and ask them if they needed any work done. It didn't matter. Anything I had to do: I did it.

It's SJ Lighting's 15th year working with EDC. How did the relationship begin and what sort of freedom of creativity does Insomniac give you?

My wife and I moved to Los Angeles in July of 2001. At that time I knew enough people to get work as a designer, programmer, and/or stage electrician. But it was a minimal amount of work– barely enough to pay bills. One of the first contracts I had when I arrived on the west coast was GIANT. They were doing 21+ events with big EDM DJs. Back then these were Tall Paul, Paul Oakenfold, and Josh Wink. These shows really helped me establish myself locally. It was not a common practice to hire a "designer" to come in and handle an EDM style show; the typical protocol was calling a vendor, telling them the budget, and letting them do their own thing. I was not in favor of that system. I became the liaison between the promoter and the vendor. I designed and programmed the shows and also coordinated the vendors to produce what I had envisioned.

New Year's Eve 2002, GIANT coproduced Together As One, which was a combined effort between Insomniac and Go Ventures. I designed the GIANT portion of the event. From that event, moving forward, I began doing design work for Insomniac events like Nocturnal Wonderland, Electric Daisy Carnival, and some other shows. I became the production designer for all of the stages, and for years after that SJ Lighting designed nearly every stage for every event they produced. It's been an amazing experience throughout the years; as we have both grown together. Pasquale [Rotella] and Insomniac have always given me the latitude to express myself creatively. I am forever grateful for that, and in turn, I think that my company has produced some cutting-edge designs that have helped energize their shows.

How did you approach the 2015 installment of EDC differently than those of past years?

EDC 2015 has been such a new experience for all of us. The event, the community, and the musical genre have been constantly evolving and this year's event is no different. SJ Lighting designed the Circuit Grounds completely: production, lighting, video, and special FX. Additionally, we did the lighting design for the Cosmic Meadow in collaboration with another scenic designer. The event is so large now; there are nearly 150,000 people in attendance each day. The design team has grown with both internal staff for Insomniac as well as other contract designers doing work on the show. It was a nice change to be able to focus all of my energy into one massive stage as opposed to years past where I was driving around in my golf cart for a week from stage to stage making sure everything was going as planned. Our work on Circuit Grounds this year was an amazing experience. Our entire team really put forth an amazing effort, and that has been illustrated in the responses we've received about the show. From DJs to audience members to Insomniac employees, it's been one of our most well received designs todate. Additionally, Cosmic Meadow was also a 100% success. The lighting design truly highlighted the scenic design and maintained that edge that I feel is so critical to doing a proper EDM show.

What are the challenges of lighting an event that's prone to extreme elements like heat, wind, and dust?

Working outdoor shows always present a host of challenges–heat, wind, dust are just a few. You have to really approach these events with a very pragmatic outlook and think logically. When it's 115° outside, it's not a good idea to have a crew working, so we don't start until 7pm and we work the night shift. Well, there is not much you can do about [wind] besides making sure things are secured tightly and engineered to withstand at least 60 MPH. We have shut down the jobsite on more than one occasion because of these things. Dust: it is what it is. We don't turn equipment on during the day and we do our best to fix things as they break. It's important to use good quality equipment that can withstand some abuse. This is where you determine what gear is superior; it's a real proving ground.

When approaching design for a festival of that size, is there a certain aspect you always begin the process with?

There are so many factors when deciding how to approach design, starting with a very basic thing: BUDGET! Can't do much without money. After that: stage size, musical genre, and are there any rider requirements? All of these things impact what you're planning to build. Then the fun begins: coming up with a workable concept, considerations, available equipment, scenic elements, etc. Can you build it in the allotted time frame? Can you tear it down in the allotted time frame? I usually start with a hand sketch of some different ideas before eventually narrowing down to something I like. After that, I start drafting it in software and continue through the process until the system is fully populated with all the details and we've produced supporting documentation.

How is that approach different when designing for a nightclub or smaller venue?

Designing festivals have many similarities and only minor differences. The main difference is size and scope. For a festival, I would typically have a few million dollars-worth of equipment on my stage. That's not a typical budget for you average club, so being fiscally responsible and understanding how to be creative with your money is key to creating a world-class system for a nightclub. Nightclubs also tend to be a more immersive environment, while a festival typically starts at the stage end and the majority of the stage design is put there. Things might be different when designing a show in a structure–then it's treated more like designing a club (or at least a hybrid between the two).

You also have been involved in Ultra Miami's design. What goes into designing for that event?

I've been with Ultra Miami and Ultra Worldwide since the very beginning. I've done every Ultra since the second Ultra back in 2000. We start working on that show the day after the show before ends–we spend every bit of a year getting it sorted out. This is the show that kicks off the festival season in the US, so we give it a really strong effort and try to step it up each year so that our audience gets a new experience every time.

What do you recall as being the most challenging/fulfilling installation in your career?

Crobar New York stands out in my mind. It was intense. Borderline chaos. Actually, it wasn't borderline; it was just chaos! The list of challenges we faced seemed to stack up against us everyday. I'd list them all for you, but I think it would be better over a drink. [laughs]

Any particular memories about it?

I remember the night before it opened. I was there until 6 AM working on getting the system operational. I had issues that couldn't be resolved until the next day. I was calling people in the middle of the night; I didn't care because I was freaking out. I was with my buddy Mike D. who was going to be the operator for the venue. We got in a cab at 6 AM to go get some rest but traffic was at a standstill, it was pouring down rain, and I was having a panic attack. I started getting out of the cab to walk back to the hotel in the rain, but Mike pulled me back into the car and asked if was crazy. He saw that look in my eye. I got back in the cab, made it back to the hotel, slept for an hour or so (maybe), went back to the club, and finished the job. After all was said and done, we won a ClubWorld award [Best Lighting System] for that venue, which justified all the pain and suffering it took to bring that one to life. That club was magical. Not sure there will ever be another one like it.