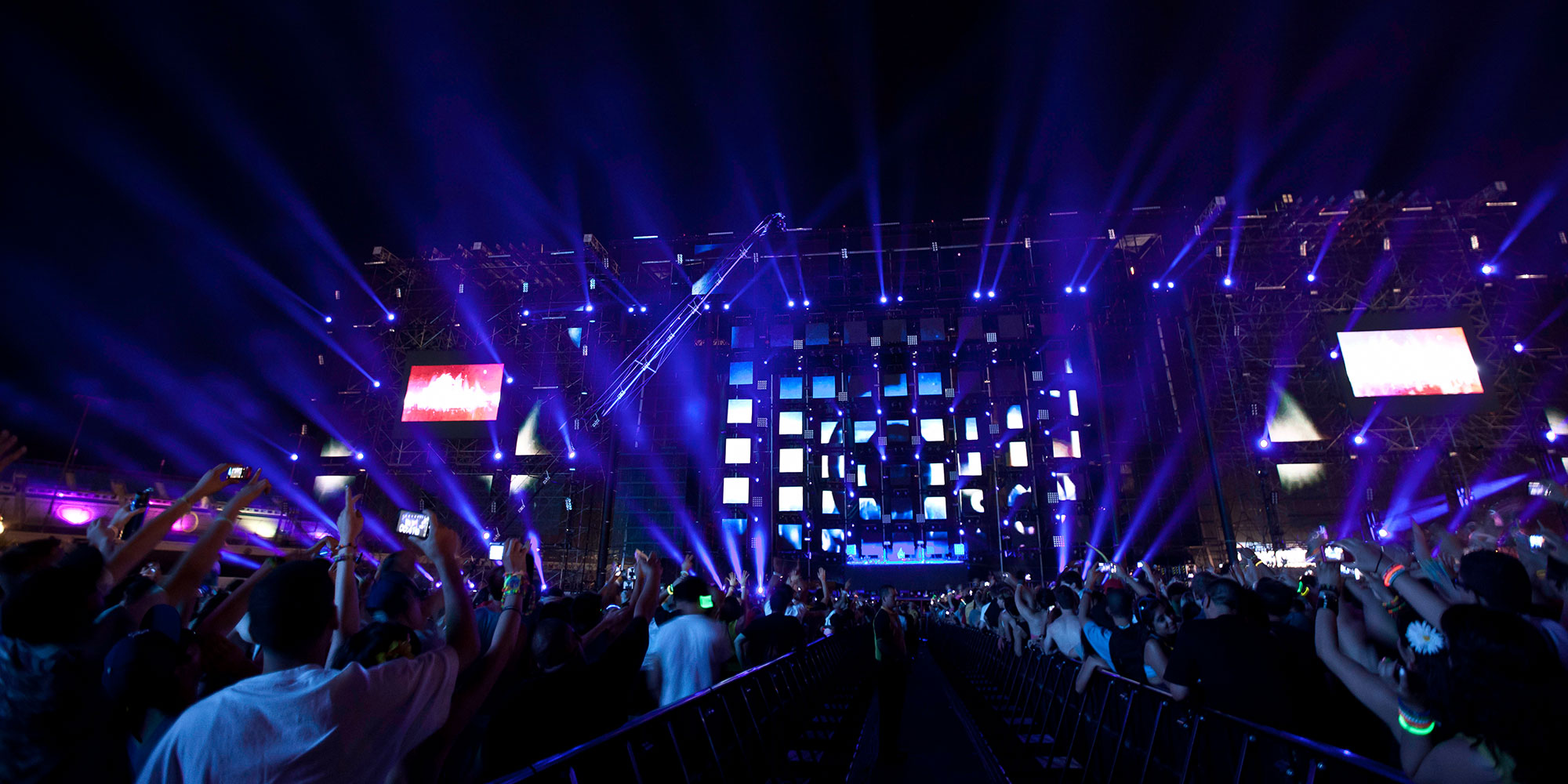 The event benefited from imaginative staging and effective crowd control.

LAS VEGAS – The Electric Daisy Carnival has been staged for 15 years, and the biggest one by far – besting even Coachella's attendance with some 250,000 visitors to the Las Vegas Motor Speedway – took place June 24-26, without any major incidents marring the fun. Producer Forrest Hunt, Pasquale Rotella, CEO of Insomniac Events, production manager Alyxzander Bear and a design team that included show designer and director Stephen Lieberman of SJ Lighting put on a three-night show that was not only safe, but also likely to bring crowds coming back for future raves. The event included five performance stages, carnival rides and art installations, turning the 1,000-acre racetrack into the largest electronic dance music festival in the United States. Lieberman was tasked with designing all of the five performance spaces, using a wide assortment of fixtures from Clay Paky, Coemar, Color Kinetics, GLP, High End Systems, Martin and Vari-Lite. All were controlle d by grandMA consoles at each stage.

The main stage, featuring international DJs Tiësto and Paul Oakenfold, was built by Mountain Productions with lighting and video provided by AG Light & Sound and lasers by Lightwave International.

At 250 feet wide and 80 feet tall, the stage was the largest that Lieberman has ever designed. "It was massive, jaw-dropping and visually devastating," he recalls, bigger even than the mammoth stage at the Ultra Music Fest in Miami. "Mountain built its stage 10 feet higher to accommodate the design."

The live stage hosted the majority of the live acts for the festival, including Plastikman, Röyksopp and Empire of the Sun. "Changeovers and backline all had to be considered throughout the design," Lieberman points out. "Since the entire stage needed to be loaded out in 12 hours, we decided to use a truck stage with the scaffold design on the wings to expand the perspective." The live stage structure was built by Kleege Industries, with lighting by Felix Lighting, video by Global Trend Productions and lasers by Lightwave. Simon Barrington was the programmer.

Also at the main stage, eps america constructed a long passageway of its GIGS barricade from the stage to the front of house, creating a protected zone for cables and the huge security staff. In total, eps america supplied more than 1,500 feet of black and silver crash barricades. The Circuit Grounds stage extended 500 feet over the crowd and sported 200-foot wide arches climbing to 70 feet at their apex. A clamshell truss structure was built over the stage to support independently-flown LED screens and lighting elements.

"Building this stage was a tremendous undertaking in terms of engineering and actual construction," says Lieberman. "It was impossible not to be overwhelmed when approaching this area and getting a sense of the scale of it." Patrick Dierson handled programming and lighting direction for this stage.

The Undocumented stage, a self-climber with a massive scaffold design in the wings, hosted top acts such as Skrillex and MSTRKRFT. Eighteen custom video and lighting pods highlighted the stage design. Each pod contained LC panels backed with a luminaire to punch through. Scaffold towers were lined with 37mm LED video screens. The design also arranged LED video screens to be placed on stage, on the DJ façade and downstage.