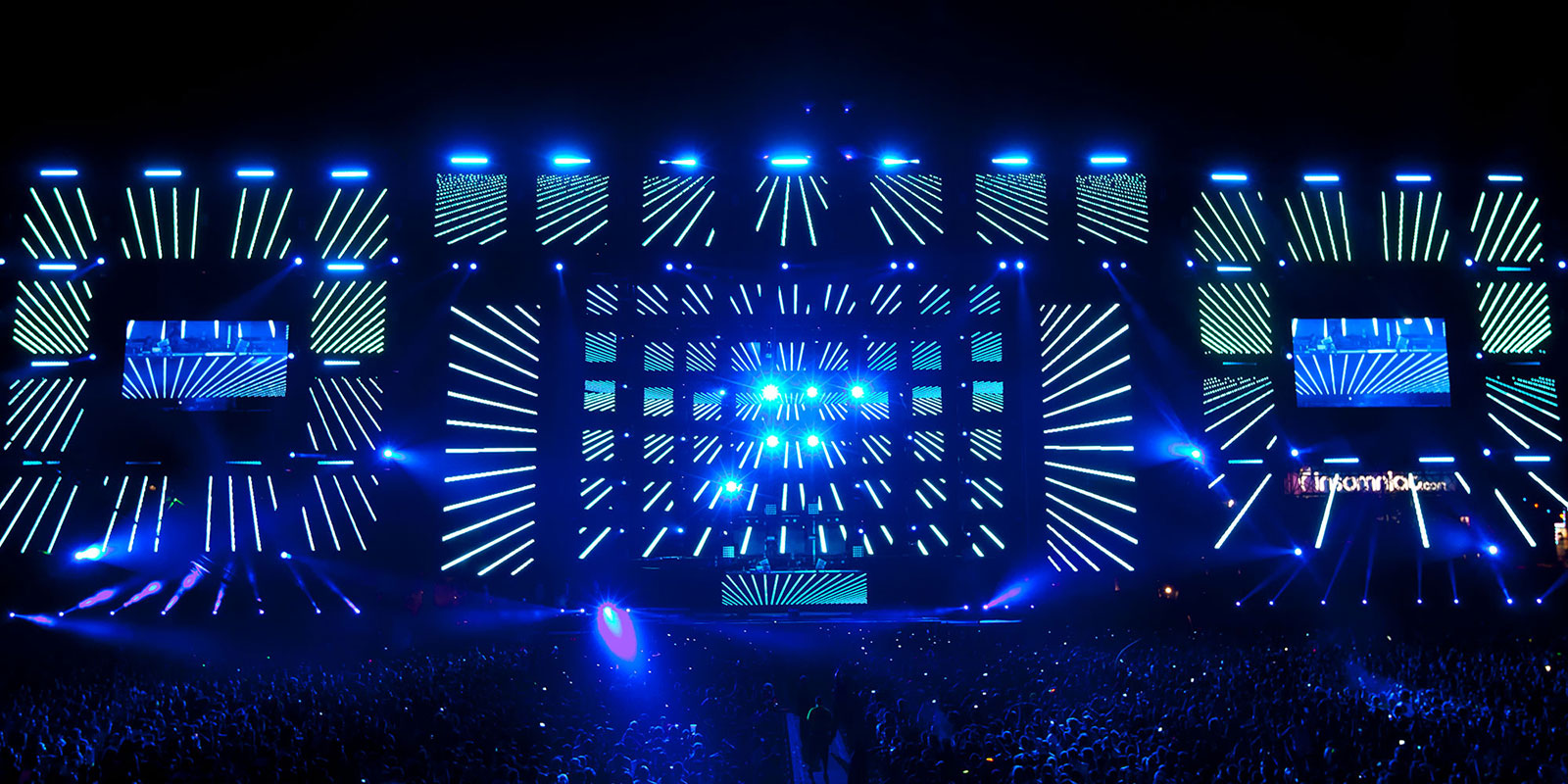 Los Angeles (August 2, 2011) – At its first ever three-day event, Electric Daisy Carnival (EDC) put the petal to the metal and roared onto the Las Vegas Motor Speedway with MA Lighting's grandMAs and a large complement of Clay Paky lighting fixtures supporting the non-stop performances playing on five stages. A.C.T Lighting is the distributor for MA Lighting and Clay Paky in North America.

"EDC has become the largest electronic dance music festival in North America," says show designer and director Stephen Lieberman of SJ Lighting, Inc. "In these environments, the visuals and stage designs are critical components of the audience experience: They're intended to be full-tilt lighting and video experiences attacking the crowd with visual stimuli. The show is not scripted and the lighting and video are set up to run live all night long. So operators need to be able to ‘rock' their show to the music and make changes in a millisecond."

Lieberman, who used grandMAs for EDC last year, believes that they offer "the most advanced programming tools, networking and broad range of set up opportunities for a show this scale. I travel with effects, macros, views and palettes and can drop them into my show in just a few minutes with very little programming time."

At EDC Las Vegas Lieberman deployed grandMA and grandMA2 systems, which "performed with flying colors. They are my go-to console. Tech support is second to none, and most of the vendors I work with know the console well enough to set it up before I even get there."

He also selected a large inventory of Clay Paky Alpha Spot HPE 1500s, Alpha Beam 1500s and Sharpy fixtures. "I love the Clay Paky range of fixtures," he says. "They have super clean optics, are really fast and bright and offer a great feature set. They have quickly become my preferred fixtures for large-scale shows. The Sharpy, in particular, is amazing – you can see them for miles! I'll be spec'ing them over and over."

Lieberman's design talents were evident on all five of the stages in Las Vegas.

The main stage was built by Mountain Productions with lighting and video provided by AG Light & Sound and lasers by Lightwave. At 250 feet wide and 80 feet tall, the stage was the largest that Lieberman has ever designed. "It was massive, jaw-dropping and visually devastating," he recalls. "Mountain built its stage 10 feet higher to accommodate the design."

"We didn't miss a trick: 12 full-color lasers, flame throwers, cryo jets, confetti, pyro," he says. "My main goal was that anyone who had the opportunity to stand in front of the stage and watch the show would keep the experience forever." Lieberman also programmed this show.

The live stage hosted the majority of the live acts for the festival, including Plastikman, Ryksopp and Empire of the Sun. "Changeovers and backline all had to be considered throughout the design," Lieberman points out. "Since the entire stage needed to be loaded out in 12 hours we decided to use a truck stage with the scaffold design on the wings to expand the perspective. We lined all of the scaffolds with Versa Tubes to give edge detail to the structure and had a dozen Sharpys in the lighting mix. Overall, it was a great live environment and the acts came on and off the stage flawlessly."

The live stage structure was built by Kleege with lighting by Felix Lighting, video by Global Trend Productions and lasers by Lightwave. Simon Barrington was the programmer.

The Circuit Grounds stage extended over the crowd 500 feet and sported 200-foot wide arches climbing 70 feet at their apex. A clam-shell truss structure was built over the stage to support independently-flown LED screens and lighting elements. "Building this stage was a tremendous undertaking in terms of engineering and actual construction. It was impossible not to be overwhelmed when approaching this area and getting a sense of the scale of it," says Lieberman. AG was responsible for the structure, lighting and video with lasers by Lightwave.

"The festival started each evening around 8 pm and ran until 6 am," says Dierson. "This timetable was primarily forced by the extreme climate of the Las Vegas outlands: By noon the blazing sun made it impossible to see the lights and the temperature on the speedway was upwards of 110º F. Not only was it physically dangerous to have crews exerting themselves in those temperatures, but programming time for guest lighting designers was non-existent. That meant the guest LDs had to work with what had already been programmed, which none of them seemed to have much of an issue with after stepping up to the desks."

Dierson notes that the grandMA's User Profiles feature came in handy in assisting the guest LDs. Once they were comfortable with the layout of the desk playbacks, Dierson was able to log onto the back up grandMA as a different user on the main desk and keep a watchful eye on the proceedings. "That way the guest LD didn't have to be overly concerned about keeping track of themselves," he explains. "I was able to grab fixtures live and manage them for the guest LD as well as keep track of their running playbacks to manage anything they might leave running by accident."

Despite the brutal heat Dierson says the grandMAs "continued to run flawlessly. Dust management was also a huge issue when you're sitting on a field of gravel and desert earth and a hundred thousand people are dancing around you. We performed a few dustings with a soft paintbrush each night and religiously cleaned the consoles off each morning before covering them for the day. But the grandMAs kept going strong without any issues whatsoever."

The Undocumented stage, a self-climber with a massive scaffold design in the wings, hosted top acts such as Skrillex and MSTRKFT. Eighteen custom video and lighting pods highlighted the stage design; each pod contained LC panels backed with a luminaire to punch through. Scaffold towers were lined with 37mm LED video screens; LED video screens were also placed on stage, on the DJ façade and downstage. A grandMA ably controlled the huge roster of lighting and video elements.

Visions Lighting handled the construction and lighting and Global Trend Productions the video. Joe Cabrera was the programmer.

Vsquared Labs served as the VJ for each of the five stages.

Electric Daisy Carnival is produced by Insomniac Events and is held in various regions throughout the year.