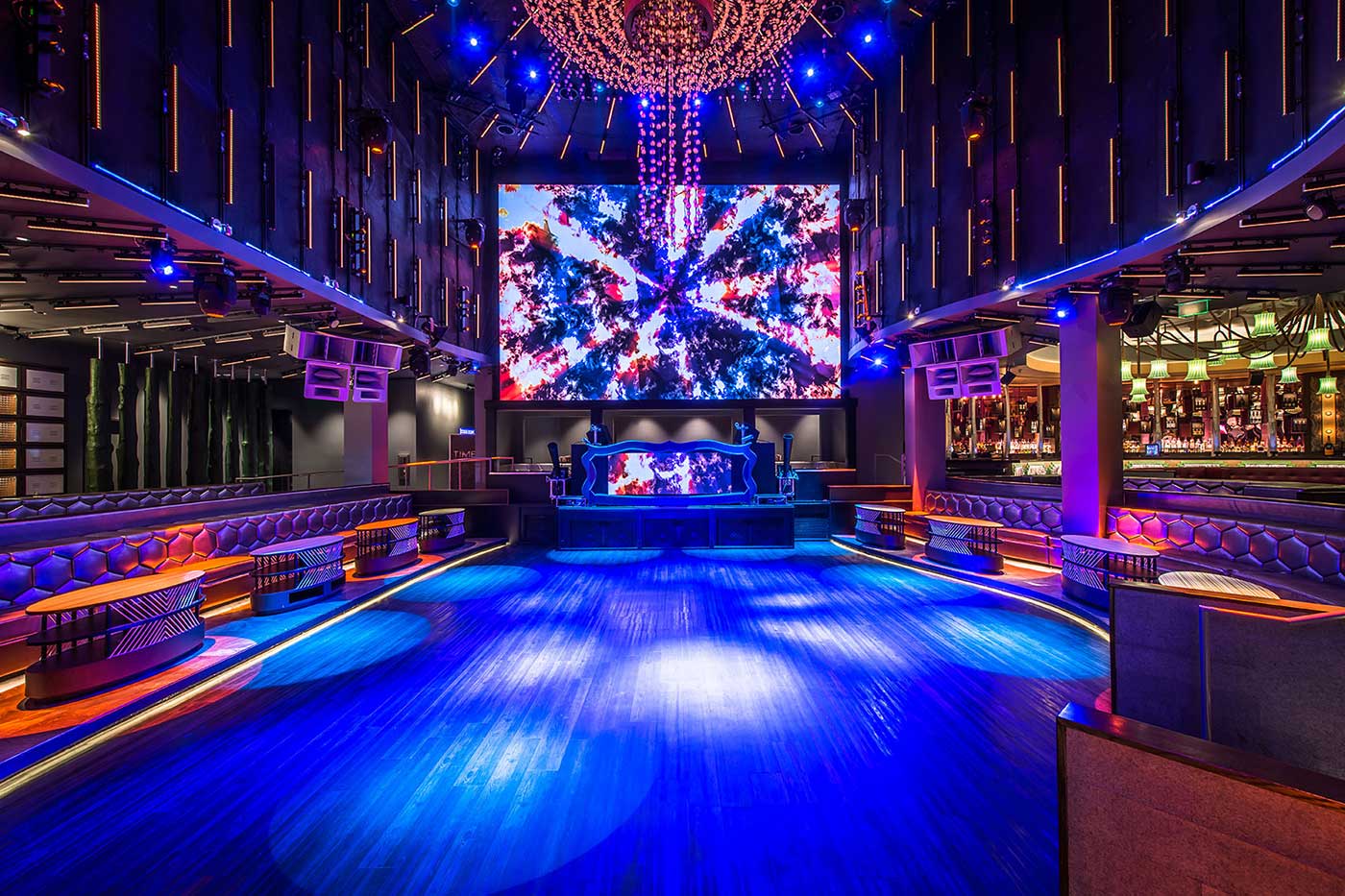 Time is a high-end nightclub based in Orange County with a striking design, which was completed by Davis Ink. The interior designers enlisted the help of SJ Lighting and Sound Investment to deliver the technology to match the unique environment.

The building that now houses Time nightclub was originally designed as a Nike Town retail store, however, since then, plans changed - and now the high-end nightlife venue is open in Orange County, California, offering a club experience like no other.

Davis Ink, a leading interior design firm, took Time on as its latest innovation. Having worked on some of the most unique nightclub and hospitality venues, Davis Ink was the perfect choice, though this project was even more special, considering it is based in Orange County, too.

"This is an incredibly special project for us as it's right in our own backyard. It's literally walking distance from our office," said Davis Krumins, Interior Designer and Founder of Davis Ink. "A wonderful opportunity to provide something fantastic for the people of Orange County. There will no longer be a need to travel to West Hollywood, LA or Las Vegas."

Davis Ink was tasked with creating a space that would that would rival anything on offer in LA or Las Vegas. The ambience that it wanted to create for the venue was to be achieved through the combination of theatrical lighting, enhanced sound and a completely unique interior design. However, this meant that the team at Davis Ink had to be creative with construction methods and building materials - even to the extent of designing fixtures and furniture, rather than purchasing expensive pre-designed items.

"Although the space had been abandoned for many years, it was filled with all sorts of cool architectural details," added Davis. "The two-level building shell was composed of three intersecting circular spaces. These organic shapes allowed us to break away from the standard rectangular nightclub layout.

"By removing the ceiling in the centre circle space, we created an approximately 35ft ceiling that would become the ceiling of the dancefloor and stage. This enabled us to create a huge central theatrical lighting chandelier to fill the vertical space."

A pre-existing, three-level staircase was removed and the remaining elevator shaft wall beyond was reframed to accommodate a 35ft custom LED wall. This wall became the backdrop for the stage and the ‘Alice in Wonderland'-inspired DJ booth. By eliminating most of the interior walls, Davis Ink was able to open up the entire space and offer visual access to the dancefloor and stage from anywhere in the club.

Two smaller, circular rooms were transformed into large circular bars and the intersection of three circular spaces allowed the creation of an amoeba shaped dancefloor with three tiers of biomorphic shaped bottle service tables around the perimeter.

"By designing a space with literally no straight lines, we were able to create an incredibly dramatic, sexy, and magical environment, which is very unique for a large nightclub," said Davis. True to its roots, Davis Ink used high-level creativity in producing furniture and fixtures for Time. The main bar comprised of organic components, such as tree branches supporting backlit bottle shelves, a boxwood-faced green soffit and snakeskin fabric panels. The secondary bar is made of honeycomb-inspired hexagon panels, a random mix of backlit bottle displays and green, silver and black upholstered panels. The front bar consists of hexagon screens framed in barn wood, too. There are several custom light features as well, including a 35ft diameter chandelier with green hat-shaped lampshades suspended with two-inch diameter rope staggered between. The ceiling above is a kaleidoscope composed of black and white female silhouettes. All this, plus a 20ft tall champagne display and an entry surrounded by custom butterfly wallpaper.

With such a surreal, almost magical, environment using organic and modern elements in combination with unexpected traditional components, it was important that the technology that was to be installed in the venue both complemented and enhanced the design. With that firmly in mind when it came to selecting a lighting setup to suit, Davis Ink made the decision to enlist the help of SJ Lighting, with whom it had worked on projects before.

Steve Lieberman, founder of SJ Lighting, takes up the story: "Over the years, we have worked on several projects with Davis Ink and it has always been a fantastic collaboration. Time was no different - Davis Ink referred us to the owner and away we went.

"The brief was literally a case of ‘do your thing' - I was fortunate in working with Davis Ink and Time, as they trusted us to utilise our expertise to fill in their vision of the space."

From there, Steve and his team set about putting together a plan for the lighting at Time, though there was plenty to take into consideration - not least the interior design and unconventional space within the venue.

"Any time you design a permanent installation of a nightclub, there are many variables to be considered. The design aesthetic has to match all of the interior design details, the geometry of the space, the owners vision, and the budget - it's a delicate balance," explained Steve. "The space is very unique - no straight lines, for example - while the shape of the dancefloor and the heightened ceiling above it are organic. These scenarios pose a challenge in that the system needs to highlight the geometry of the space, while, at the same time, have the foundational items required to create a dynamic light show."

To do this, SJ Lighting worked closely with Davis Ink to identify a focal point location that they could base everything off. This is when the centrepiece chandelier became the main feature, reflecting the organic shape of the venue. Comprising of 90 Chauvet Motion Orbs that are draped through custom fabricated metal rings and pixel mapped using Madrix software, it offers the classic decadent look of a hanging chandelier, while the new technology delivers a modern spin on it.

Elsewhere, a whole range of Elation Pixel Bars line the vertical walls over the dancefloor, creating a incredible, eye-catching display, while the Chauvet Rogue moving lights are spaced appropriately to ensure there is even coverage throughout Time.

For the lighting control, an MA Lighting grandMA2 light is used as the main console, with Madrix controlling the pixel-based lighting and Resolume delivering all the video content to the LED screen - both of those controllers are mastered by the MA Lighting console via ArtNet, too.

Despite the complexity of the project, Steve expressed his delight with the work on Time: "In terms of the challenges when working on Time, they were simply what you would expect with any high-end project - meeting timelines, scheduling trades in an order with minimum conflict and so on. "Overall, it turned out amazing and we are very proud to have been included with such a fantastic group of people." The audio was another huge aspect of the install at Time and, similarly, Davis Ink opted for help from a company it had worked with successfully before - which is why it turned to Sound Investment. Dean McNaughton, Co-owner of Sound Investment, explained how the project at Time came about: "We've worked with Davis Ink on a couple of projects in San Diego - PARQ and Fluxx. We like what they do and they like what we do - and they thought we'd be a good fit for the project, so they recommended us.

"It was clear what the owners wanted to achieve from the outset - a high-calibre EDM venue - and we were confident that we'd be able to help them to achieve that."

Original article written in mondo*dr magazine or view the PDF