Shining a Light on the Visual Experts of Coachella 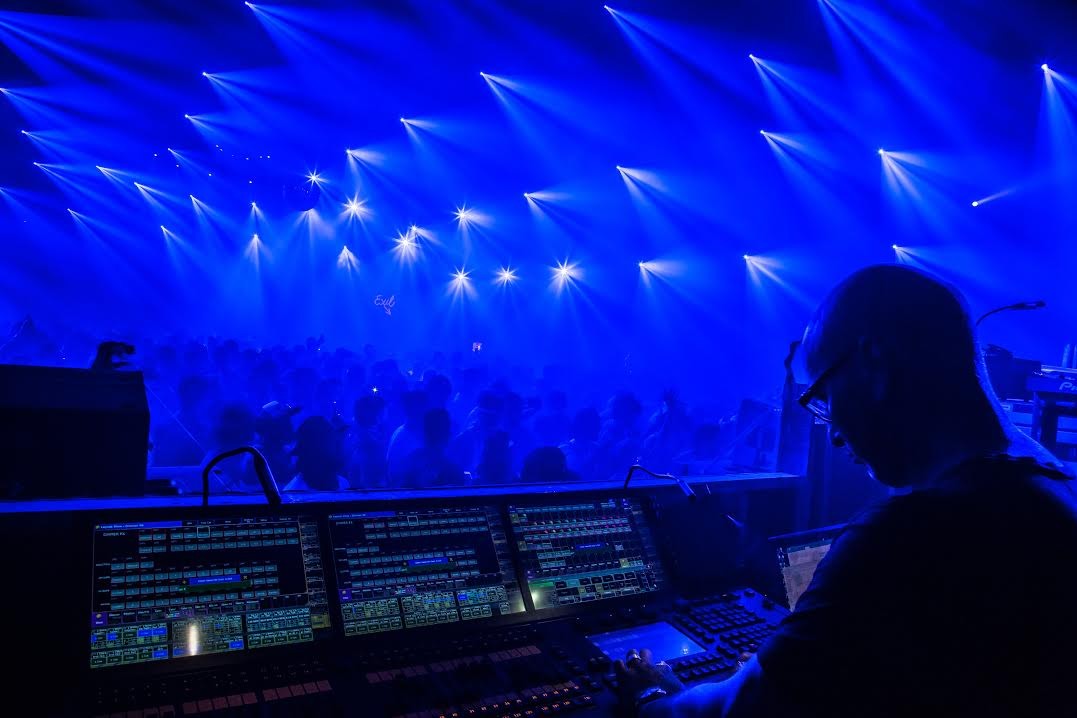 This is the moment that the fans at Halsey's nighttime set at the Outdoor Theater on Day 2 of Coachella have been waiting for. Under the natural lights of the desert sky, the clacks and booms of synth percussion fire in time with floating light rays and plumes of digital blue and magenta smoke drifting up massive LED screens and steel 3D contraptions. As the beat unfolds, the stage transforms into an alternate universe of explosive hues for the artist's aptly-titled breakout song, "Colors."

The residual light from the stage splashes on the faces of a small tribe of flower crowned Coachella princesses huddled near the soundboard. Mouthing each lyric, line for line, they look up in wonderment at the dazzling spectacle under the desert sky without ever really wondering how it got there. Or, more specifically, who put it there.

"We always make sure to capture the artist's essence in every song and make it fit as naturally with the music as possible," says Heather Shaw, founder of lighting and effects design firm Vita Motus, who spearheaded the creation of Halsey's stage show. After months of planning and weeks of rehearsals with the artist, watching the effort of Shaw's team come to life for one hour during each weekend has been a triumph. "We want to give people the full experience of what every song has the power to be," Shaw says.

Lighting and visual experts of Coachella spend most of their time hidden in the shadows of their creations. And honestly, they wouldn't have it any other way. But as Coachella finally prepares to turn out the lights for 2016, it's worth talking about those who turned them on in the first place. Between six stages and over 160 artists who perform during both weekends, festival goers have seen the difference between an amazing lights and visuals experience and those that are just ho-hum. The difference of course is how much an artist is willing to plan and pay to give you something you'll walk away remembering.

"For Coachella, I've probably worked harder on this show than any other show I've ever done before," says lighting and visuals expert Drew Best. "Because it's Coachella, because this is the thing that drives headlines." For the last two years, Best, who is also the CEO of LA-based dub step label Smog Records, has worked as A$AP Rocky's video jockey (aka VJ). It's a job that involves cultivating ideas for background visuals that help bring songs like "Long Live A$AP" and "Wild For the Night" to life through creative editing, crowd interactive elements and overall vibe that each song in the set brings to the rapper's tour.

As the music industry continues to hinge more and more of its profits on live shows, using standard, in-house lighting during an event like the first blockbuster festival of the season doesn't inspire people to stop and watch when it's time for an artist's set.

"As a fan you really appreciate that more," says Best, who also worked with Run the Jewels this year for their set during late afternoon on the Coachella Stage. "This isn't just me witnessing what I could see on iTunes visualizer at home on my iPod. I wanna be immersed in the live concert experience."

The massive arch of the Sahara Tent embedded with dangling light fixtures and huge on-stage screens can easily dwarf anyone standing before the crowd of thousands. From 100 yards away, the lights and the visuals are the thing that most Coachella-goers can actually see. What is the one thing most people will remember about Calvin Harris' headlining set? It probably won't be the remixes of other people's songs. It'll be the giant spectacle of 3D mapping, flashing lights and raining fireworks. And yet other areas of Coachella, like the Yuma Tent, were designed specifically to create a lighting environment that compliments the darkness.

Steve Lieberman, the chief lighting operator at Yuma, has a been in the business since 1995 and is the production designer for Insomniac and Ultra Music Festival. Over his 21-year career, he's helped build and design over 250 clubs. His goal at Yuma is to make the lights mimic the immersive feeling of a disco tech, complementing the steady pulse of the dance floor. Meanwhile, DJs like Nic Fanciulli, Justin Martin and John Digweed spin well-curated sets of hypnotic house, techno and trance. Lieberman works with Kobi Danan, the curator of the music at that tent, to cultivate the vibe for the entire weekend.

"One thing you'll notice when you come into Yuma is that you won't notice anything specific when it comes to technology, everything is hidden in plain sight," Lieberman says. He's referring to the craftily camouflaged lighting fixtures that construct various patterns that mirror the music and splash some much needed shine of the tent's iconic Disco Shark dangling above the sound booth.

Of course, there's more to it than just lighting the music," Lieberman says. "There's understanding the people that come to it and their behavior why they're there and the vibe of what's going on. This is not a sit down show, cue-to-cue time coding, this is a live freestyle event where we're just jamming the hell out of the place."

Same goes for the DoLab, one of the most recognizable aspects of Coachella practically since the festival's inception. Chief architects of the DoLab are brothers Josh and Jesse Flemming, who spent the better part of their year developing the evolution and the nuances of the structure they've lovingly dubbed "Big Fish," which appears to combine the best parts of a pirate ship, a tree house and a psychedelic teepi. The lighting here is all about natural colors, warm and fiery hues, and an intentional lack of the screens you see on any of the main stages at Coachella.

"We definitely emphasize more of a low-tech aesthetic," Josh says. We want to give people an environment that feels unlike anything you'll run into at this festival and focusing in on nature and bringing people closer together through the design of the structure is how we achieve that."

The beauty of a massive festival like Coachella is the ability to see all these different lighting techniques converge into one setting. And aside from the effort, the importance and the creativity that it takes to light up Coachella, it's the massive amount of time put in by a those who remain unseen that keeps the festival dancing late into the night.