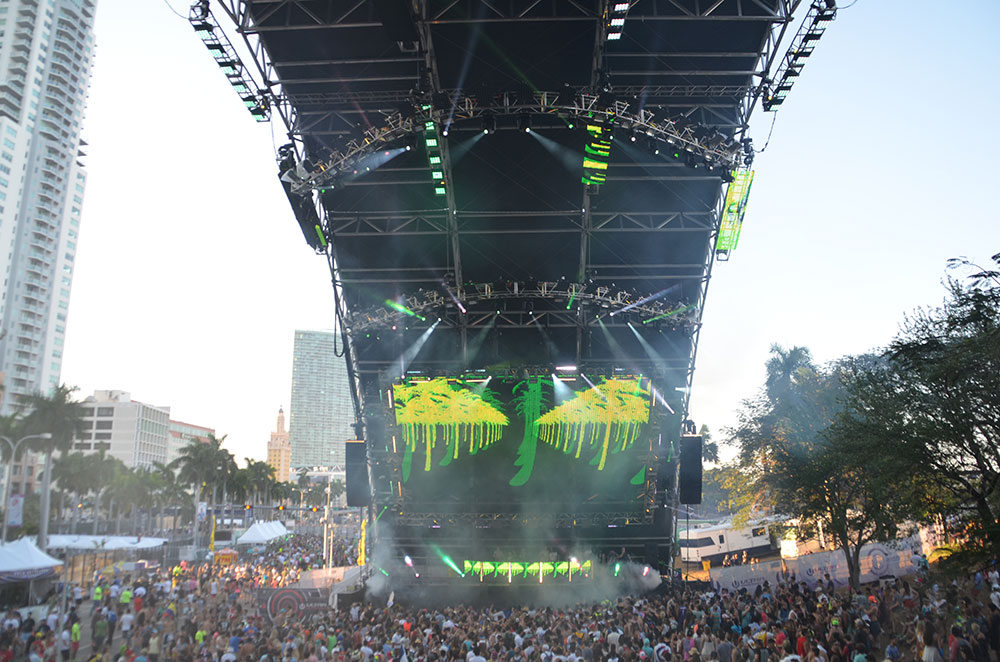 USA – All eyes were on the Worldwide Stage at the Ultra Music Festival, and why not? With a superstar studded line-up of the crème de la crème of the EDM world performing, plus a surprise two-song appearance by Ariana Grande, the thousands of fans at the Worldwide Stage pavilion were transfixed by the scene on stage. This year, the awestruck crowd did more than look at the stage, they had their collective vision funnelled into it, thanks to a commanding lighting and truss design by Steve Lieberman of SJ Lighting.

Lieberman's design concept was developed around a massive double winged truss structure that resembled an arched bridge. The abutment at one end of this bridge started at the edge of the concert pavilion, the other end was anchored behind the stage itself. This end of the bridge ran across the entire 60-foot width of the stage.

A line of 12 intense Nexus Aw 7x7 warm white LED panels from Chauvet Professional ran across the structure behind the DJ booth. Overhead were 36 additional Nexus Aw 7x7 panels on two curved rows at the base of the bridge arch that sloped toward the stage.

This combination of arched trussing and intense light over the stage and behind the DJ booth focused the crowd's collective vision. This allowed everyone to absorb a full view of the stage design regardless of where they were standing. "What I wanted to do was centre the crowd's vision," said Lieberman. "The way we arched two truss structures pulled you into the stage and gave you a 180 degree perspective no matter where you were standing."

The idea for this mesmerising arched design occurred to Lieberman after he observed his work at last year's Ultra festival. "Everyone was thrilled with the design in 2014," said the LD. "Still when I looked at it, I knew there was one thing I definitely wanted to change. Last year I noticed that when some people migrated toward the edges of the viewing area – as they always do – they wound up looking at the sides of my stage."

Determined to give the crowd a more complete viewing experience, Lieberman vowed to create a design that allowed everyone to see the whole stage regardless of where they stood. He also wanted something super-bright there to make things popped. This is where the Nexus Aw 7x7 came in. "Having these fixtures behind the DJ and overhead on the arched truss was essential to energising the stage and the crowd," said the LD. "Audience blinders are critical at a festival and the Chauvet panels excelled in this regard. We ran them at 100-percent and they dominated. We had a lot of high output movers and the panels did more than keep up. Another thing I liked about the panels is that their beam is not only very bright, it's also very narrow so it really works well with fog."

In addition to using the Nexus Aw 7x7 panels as blinders, Lieberman relied on them to serve as header displays and for pixel mapping breakout images as well as chase scenes. "The efficiency of having one fixture that can do so many different things so well is a plus," he said. "It's sweet that these panels can be killer blinders one second, then pixel mappable the next. Plus I like that they have an incandescent look, but at the same time they're LED fixtures with all the advantages of that technology."

Lieberman gave the Nexus Aw 7x7 high marks in every facet of their performance on the Worldwide Stage. "I love that these fixtures have the incandescence of a blinder, the efficiency of an LED and the pixel mapping capabilities of the 21st century," said the LD. "I wanted to pull people into the stage and Nexus certainly helped me accomplish that goal."