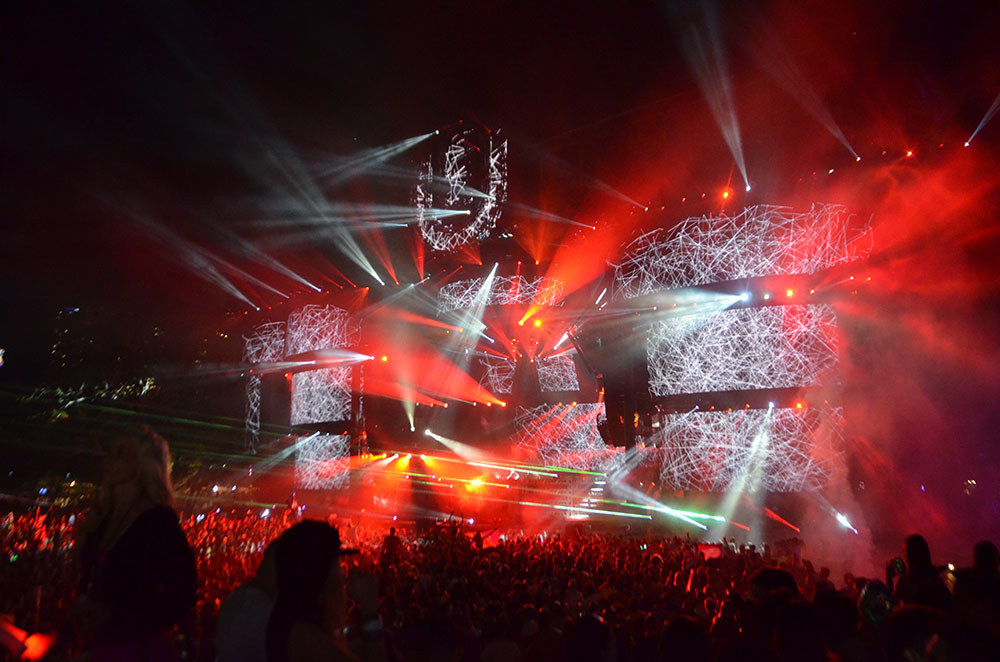 USA – If there's one thing that the tens of thousands of fans who attend the Ultra Music Festival every year can expect, it's the unexpected. The popular EDM festival has always managed to delight crowds with surprise appearances by international superstars, like Madonna, who dropped in on Avicii's set in 2012, and Usher who popped up unexpectedly this year. Like the performances themselves, the Ultra Main Stage lighting rig also never fails to astonish festival goers with new and unanticipated forms of digital imagery and visual excitement.

This year's rig was no exception. A creative effort that involved lighting designer Steve Lieberman of SJ Lighting, creative designer Richard Milstein, production director Ray Steinman and lighting director Patrick Dierson, the main stage rig awed fans with a plethora of images from massive video walls and pyro effects, plus what seemed like an endless array of strobes, blinders, spots and moving heads, including 124 Legend 230SR Beams from Chauvet Professional.

"The main stage is obviously the centerpiece of our show, so it's important that we create a huge impact," said Lieberman. "There was nothing shy about our design. We wanted to overwhelm the crowd and provide them with an unforgettable experience by not only showing them a lot of intense light, but combining effects in unique ways."

Lieberman's lighting design for the large (200' wide by 88' high by 77' deep) main stage took the crowd along for a visual journey as the massive video walls and pixel-mapped effects served up an endless variety of looks that ranged from soft cotton candy to hardcore industrial and geometrical. Throughout all the looks, the intense light from the 124 Legend 230SR Beams engaged the audience and emphatically underscored the bold nature of the spectacle.

"The brightness and intensity create a supernatural feeling," said Lieberman. "Beams have become a staple of festival lighting because of they never fail to deliver this effect. We had Legend 230 SR Beams on every single piece of truss in the rig, including on the giant Ultra Music Festival Logo on the top of the stage."

Of course, if there is one kind of surprise that's not wanted at the outdoor Ultra Music Festival, it's foul weather – OK, make that two kinds of surprises by adding "unreliable lighting fixtures." Lieberman had to contend with one of the two; it rained the first day of the festival. As far as reliability goes though, the Legend 230 SR Beams passed with flying colours.

"The Legends did everything we asked of them and more," said Lieberman. "They ran great for the entire show, even with the rain. Without a doubt, they were a very good addition to this rig."