All of the Lights: Meet the Man Who Designs EDM’s Million-Dollar Stages

Over 20 years, the founder of SJ Lighting has built an empire rigging lights for Ultra, Electric Daisy Carnival, and more. 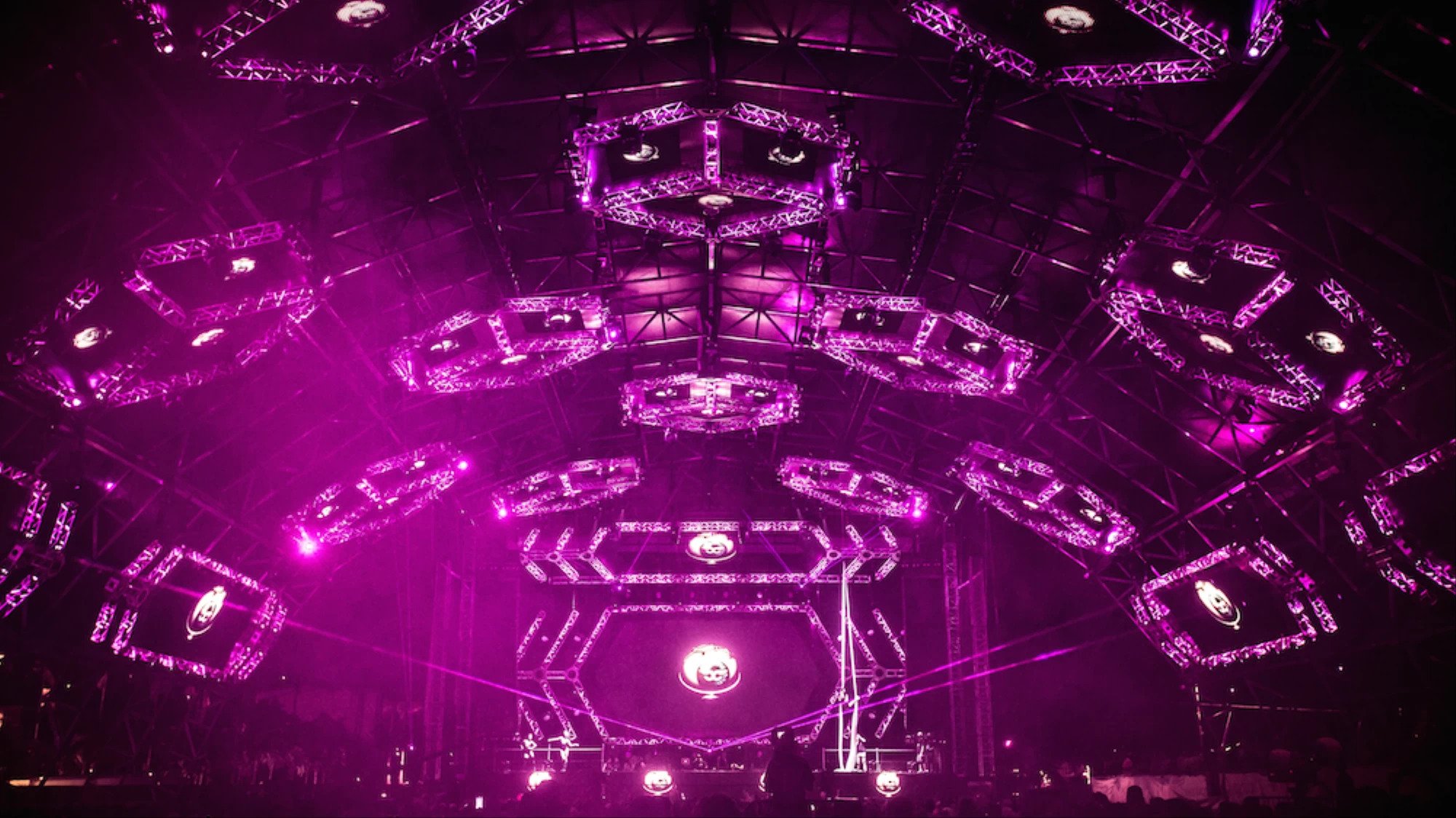 When the last beat drops at each year's Ultra Music Festival and monsoons of confetti flutter to the ground, tens of thousands of sweaty partiers draped in colorful flags from all over the world stream into the streets of downtown Miami. But as festival-goers file back to hotel rooms and afterparties, buzzing colonies of stage hands set right back to work, ripping apart the massive metal temples they spent the last month constructing—stages crafted in the shape of a boom-boxes, geometric pyramids, or massive domes lined in LED honeycombs. Steve Lieberman, 43, stands for a second in silent admiration, then flips the script with only one thought in mind: how are we going to top this?

"That's been a conversation that's been going on for nearly two decades," says Lieberman, the owner, designer, and head specialist at SJ Lighting, the official lighting and production company for Ultra Music Festival and its competitor Electric Daisy Carnival. "We've given our best effort to really take last year and just click it up. You wanna see the next evolution of it? Come back next year."

Since SJ Lighting took over the Ultra account in 2000 for the festival's second edition, freedoms (and budget) afforded to his productions have grown along with EDM's moves toward mainstream appeal and financial success. This year, the Carl Cox & Friends Megastructure alone encompasses 750 lights, 1,600 2'-by-2' video tiles, 110 strobe lights, 220 moving lights, and 600 LEDs.

Lieberman's company also designs stages for EDM powerhouse Insomniac and its flagship festival Electric Daisy Carnival in Vegas. He remembers spending $300,000 on lights and design for the entire festival back in the early 2000s. Today, that number won't even get him started on stage 4, not to mention even smaller stages like 5 or 6. Today's main stage budgets alone run in the millions, bolstered by increased ticket prices, sales, and increasingly lucrative sponsorship deals as electronic music continues its domination of mainstream entertainment.

Lieberman's empire has also expanded. He is responsible for every Ultra event around the world, as well as Insomniac's countless gatherings. His company puts together the Yuma stage at Coachella—one he describes as more of a nightclub in a tent than a front-facing spectacle like the Ultra and EDC stages—as well as setups for world-renowned nightclubs, from LIV and Story in Miami to XS and Marquee in Las Vegas. Nightclubs offer the designer variety, forcing him to work within the confines of a certain space and shape to make the most of the environment. Plus, it's kind of cool that the setups don't immediately get torn down at the end of each night.

When all's said and done, Lieberman personally designs more than 70 stages and environments a year. Basically, this dude is the visage of EDM. "Audio guys always say 'nobody comes to listen to the lights,' but nobody comes to stare at the PA either," he says. "The visual element of what's going on creates a very tangible, emotional connection to the music. When things happen when they're supposed to happen—the video, the light, those big drops and moments in the music—it means everything to the audiences. That's what gives you chills down your spine. That's what makes the hair on the back of your neck stand up."

Some artists have more strict demands for others. Save for one song, Knife Party doesn't want to see anything but red light. Carnage only likes to use four distinct colors at a time. Richie Hawtin has a distinct vision for how his visuals and music interact. It's not easy to make all 20-plus artists on one stage happy, but it's his years of experience and ability to adapt that make Lieberman and his team the go-to in their industry.

"I can't take credit for the industry, but when we started, there was nothing really to base it off of," Lieberman says. "When we wanted to do production, we just kind of made our own rules. When it came down to designing shows and putting things together, it was what we wanted to do."

It's still every bit what he wants to do, and not only because it's the only thing he's ever done. Maybe you'll find him, a bald-headed, middle-aged man, beaming from the front of the Carl Cox & Friends Megastructure—one of his prized designs and a project on which the British DJ gives him artistic carte blanche. Cox has worked with Lieberman on his namesake stage for more than a decade, and trusts Lieberman to bring the cornea-searing goods every year.

When asked how his company has cinched many of the biggest jobs in North America, Lieberman points to his dirt-eating 20-year journey to the top. "I fought really hard to get where I am, nobody handed me anything," he says. "When I started my business in New York in 1995, I put roller blades and a backpack on. I would skate from club to club, door to door, bar to bar, knock on their door and ask them if there was anything I could do; fix your lights, program your lights, do you need bulbs? I'll sweep the floor, I don't care, give me work. I starved for years. This was the worst side of the industry you could get into."

Even once his business started getting off the ground, Lieberman had to take it on the chin from bad clients and bad jobs. He's worked hard hours only to get ripped off by promoters or watch as cops busted the party before it began. One show in particular, somewhere in the mountainous desert around the Arizona and California border in the year 1999, stands out as particularly horrifying.

"I remember going to collect my money and, literally, the sky was full of bats which was just made it so much more ominous," he remembers. "I went to the promoter because he owed me whatever it was, $2000. I was like 'hey buddy, think we can settle up?' The security guard or whatever, I guess you could call him that turned, around with a sawed off shotgun and told me to get the fuck out of there, and I listened to him actually. I remember walking back to the truck like 'guys, load up. We're out of here.' 'Did you get paid?' 'No, but we're alive.'"

Lieberman says the current EDM industry has become much more legitimized, pointing to the year 2000 as the beginning of the modern production world. That was around the time he first signed on with Ultra and Insomniac, partnerships that proved to be invaluable in the race to cutting-edge technology. Much of his work in the early-2000s was poorly documented, but Lieberman is thankful for the number of professional photographers documenting festival stages with beautiful, slow-motion after-movies these days. He says it's "heartbreaking" to watch his rigs come down after only a few hours.

Designs can go through as many as 20 reiterations, and each of those can fall victim to three or four rewrites. Lieberman describes himself as an "obsessive-compulsive neurotic control freak," and he has to be. If one foot of design is wrong on the documents, he can't expect the men and women on the floor to make up for his mistake.

If something goes utterly wrong, like when when it rained so hard in Johannesburg a month ago that Ultra South African opened with lights and production working at 25 percent functionality, Lieberman feels physically ill. "It's like getting punched in the ribs," he says. "I won't even take my phone out. I won't take my camera out. I barely want to look at it." In the end, the Ultra South Africa team worked tirelessly that night to have it up and running at full force by day two.

Thankfully, Miami has been bright and sunny as ever over the past few weeks, and Ultra 2016, which goes down March 18 to 20, is well on the way to being picture-perfect. From my home near the festival grounds, I can already see the honeycombs screens of the Carl Cox & Friends' stage are up and undergoing tests. The main stage is covered in curved electric-light rainbows ready to bathe the downtown skyscrapers in technicolor and strobe. Each bulb is a tiny piece in a massive puzzle, and they all must work together to pull off a good show. Of course, if Lieberman does his job right, you won't notice anything in particular. You'll simply stand there stunned.

For a look behind the curtain at the types of megaclubs that Lieberman makes lights for, watch Noisey's recent documentary about the Las Vegas EDM scene.