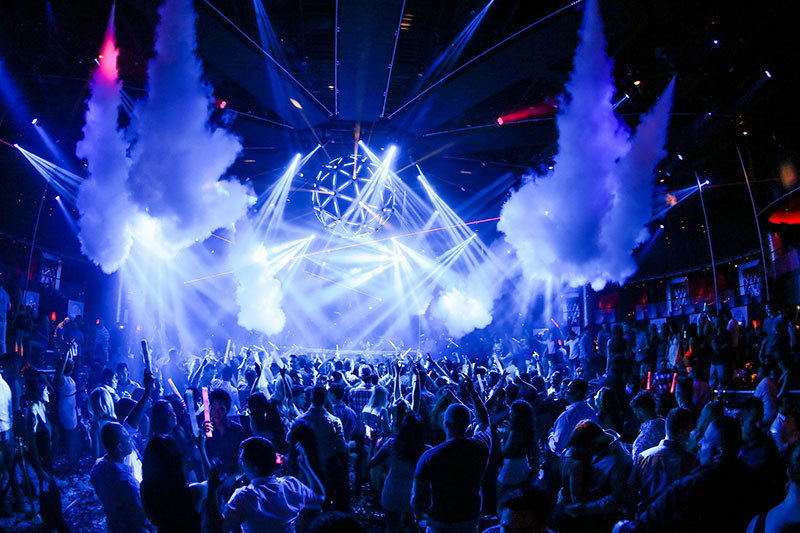 Clubbing in Sin City is running in high gear with several high-profile club openings in Las Vegas this year and Victor Drai's new Drai's Beach Club & Nightclub atop the Cromwell Hotel is perhaps the hottest of them all. Elation lighting plays an integral part in the club's visually stimulating lighting, designed by Steve Lieberman of SJ Lighting, the man behind other recent Vegas club openings with Elation lighting rigs (Marquee, Life at SLS).

The 65,000 sq ft venue features both indoor and outdoor areas, including an iconic rooftop party porch and all the VIP amenities you would expect from a club of this stature. The sophisticated and sexy club embodies the attention to detail we've come to expect from nightlife mogul Victor Drai as well as Steve Lieberman, who has surrounded clubbers in an adrenalin-producing immersive lighting atmosphere.

A flexible Elation lighting package integrates with video throughout the 4,500- capacity venue. Surrounding the dance floor's custom-built 80-sided polygon centerpiece ball is a complement of spots, beams and washes, "the 3 basic food groups of lighting" as Steve describes it. Given a high degree of autonomy in creating the lighting, he layered into the design Elation Platinum Spot 5R Pro and Platinum Beam 5R Extreme moving heads, along with Rayzor Q12 Zoom LED wash lights and Protron LED strobes.

The system is used for broad washes, edgy spot and strobe lighting, as well as aerial effects with each night requiring anything from big lighting looks for those energetic peaks to more subtle moments with atmospheregenerating details. Other effects like laser and blinder effects as well as video are layered in. "Between those fixtures it gives a lot of different options and elements to make the space more dynamic from a live show where you need more traditional elements to dance floor lighting," Steve comments.

The successful result at Drai's is the outcome of Steve's thorough design process part of which involves turning on only one layer of lighting at a time to see if the pattern makes sense and also to make sure that it fills out the room and feels right. Designed with flexibility in mind to keep the lighting fresh and stimulating, the design forms a single cohesive element with all lighting elements working together.

Additionally, true to his design ethos, the lighting design at Drai's works with the geometry and infrastructure of the space, including the nightclub's massive ceiling. The second-level ceiling extends all the way out to the main dance floor with LED video on the facia of the upper wall soffit and Cuepix Strip WW blinders lining the soffit's bottom.

Opting for a more classic white light blinder look, the Cuepix Strip WW blinders give a variety of incandescent looks. "I didn't want color changing or rainbow chases," Steve says. "I wanted something that looked as close to incandescent as possible and had the look of a traditional blinder." Because the Cuepix Strips' LEDs are individually controllable, it's also possible to do special effects like dynamic chases that role around the mezzanine. The Cuepix Strip WW's warm white LEDs may look "like a light bulb" but the fixture includes features you can't get from incandescent like strobing and dimming. Power consumption is also less than with an incandescent source and the club will probably never have to change out the light engine.

Officially opened over Memorial Day Weekend in May, Drai's one-of-a-kind experience and immersive atmosphere has proven a huge success with Victor Drai himself exclaiming, "If you have a vision, the right team and partners, you really can make the impossible happen."