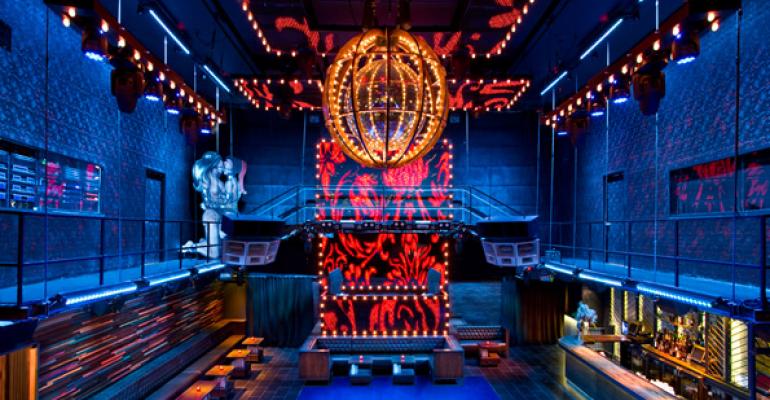 Marquee Nightclub in New York City was completely gutted and renovated, with lighting and video design by Steve Lieberman of SJ Lighting. Working with interior designer Josh Held to recreate what the team achieved at Marquee in Las Vegas, the venue has its roof heightened by 15' and completely new video and lighting systems installed.

Lieberman designed a pod system for some of the technology with four lighting pods comprising custom AG 37mm LED Video Panels that can move up and down, each with an Elation Professional Platinum Beam 5R fixture in the center. The pod frames have Diversitronics Finger Strobes, and Philips Color Kinetics iColor Flex LMX nodes with custom Marquee lenses. Milo Sa designed the video control system using a custom dual Apple Mac Book Pro laptop setup based around GarageCUBE Modul8 and MadMapper, and VidVox VDMX software.

A fifth square centerpiece features the same video technology as the pods, except using Elation Platinum Spot 5R Pro fixtures. It also has an opening in the middle to accommodate a mirror ball inside a custom frame with tiny flicker lamps on it, very similar to the one in Las Vegas. Flanking the centerpiece are two custom built side hang positions, with additional Platinum Spot 5R Pro fixtures and Chauvet LegendTM 412 units.

"There are three distinct areas in the venue—the main room, the mezzanine level, and then the boom box underneath the mezz—but there is no hard surface separating these areas," says Lieberman. "It's really one big room. As you go from the ceiling to the upstage wall, it flows straight into a video wall [custom AG 18mm LED panels], that has the same frame detail around it, just minus the Finger Strobes." Below that wall under the bridge of the catwalk, is another second half of 18mm LED wall, broken by the catwalk, but mapped as one image when seem from afar. The front of the DJ booth also features the same custom AG 18mm LED panels. "Everything has the same frame, with a minimum of the Marquee lenses, while everything in the ceiling has the addition of the Finger Strobes."

On the face of the bridge are Eurolite LED two-light audience blinders, as well as two X-Laser X-Beam RGB systems. In the upper mezzanine area is another moving lighting strobe package attached directly to the ceiling, without framing and using minimal hanging hardware. Additional effects include a liquid nitrogen system installed by Alejandro Gonzalez of Kryogenifex, as well as Antari Z-1020 Foggers and HZ-400 Hazers, as well as an Antari S200 snow machine.

The lighting system is controlled via MA Lighting grandMA 2 onPC, including an MA onPC Command Wing and an MA onPC Fader Wing, running on a Cybernet iOne-H5 All-In-One PC.

Lieberman programmed the lighting system himself. The lighting and video systems were installed and customized by Andrew Gumper and his team at AG Light and Sound, including fabricating all the structural steel and aluminum for the pods.