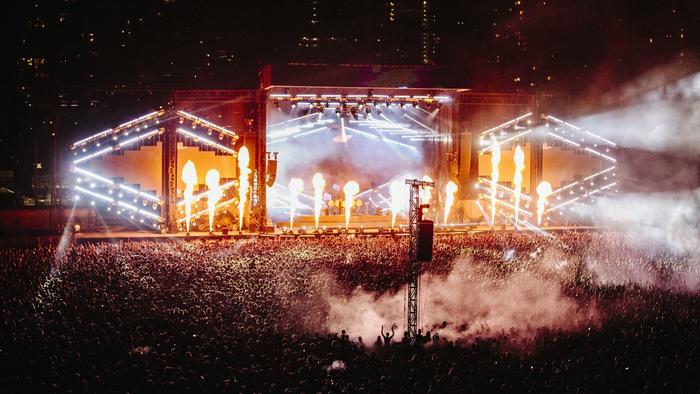 Perry's Stage is one of the biggest draws at Lollapalooza with its stream of danceable electronic music. (Hilary Higgins / For RedEye)

Lollapalooza is about more than just music. The four-day festival is also a general cultural affair – love it or hate it – touching on everything from food to fashion to philanthropy.

One of the elements that contributes to a fully immersive Lolla experience? Lighting. Yes, lighting. For electronic dance music acts especially, the light show that accompanies the musical performance can transform a DJ set into a fantastical delight for the senses.

Steve Lieberman of Los Angeles-based production design company SJ Lighting is in the business of creating these experiences. With more than 25 years in the industry, Lieberman and his team are responsible for designs at Coachella, Electric Daisy Carnival and, for the third year now, Lollapalooza. Specifically, Lolla's danciest stage: the electronic music-focused Perry's Stage.

No stranger to Chicago's nightlife scene, Lieberman has also designed lighting at Prysm Nightclub, Studio Paris and Tao Chicago, which is scheduled to open next month.

He spoke to RedEye about his growth from working raves beneath the Brooklyn Bridge to some of the largest music festivals in the country.

Q: How did you get into the light design business?

A: It's been kind of an evolution. My first job at a nightclub was in 1987, but I wouldn't call that a lighting designer because I worked as a barback and floor mopper.

But I would say since 1990 – and then professionally since '94. I've always worked in nightclubs and you know, the raves hit New York in the 1990s. I got involved in that through some friends who were actually doing lighting and that just kind of snowballed over the next 25 years into lighting and productions in festivals.

Q: How did you transition from nightclubs to festivals?

A: Festivals back in the early- to mid-'90s were really just raves. At least the ones that I was in. I'm standing backstage at Lollapalooza. But back then, we were doing raves under the Brooklyn Bridge and in a warehouse upstate somewhere – in a field, you know, anywhere where we can set speakers and lights up and throw dance parties. So those evolved. Dance music culture went from subculture to sort of mainstream. I think there are still elements that are very much subculture. But as it became a little more widely accepted, the shows grew exponentially and turned into the modern-day music festival.

Q: How long have you been involved with Lollapalooza, specifically?

A: This is my third year with Lollapalooza. I was hired specifically to come in and work on Perry's Stage – which is their dance music environment – and give them something a little more avant-garde and advance their design aesthetic a bit.

Q: Take me through the process when you're designing the light and the stage for Perry's. Do you work with the artists or acts in order to do this? How does it work?

A: My relationship with C3, the promoter and the owner of Lollapalooza, is pretty fantastic because we have a trust between us. Obviously, they have to approve whatever we want to do, but we understand what the look is and they're depending on me to tell them the look, not the other way around. The design comes out of our office and we send it to C3 and they either say yes or no. So far it's been three years of yeses in a row, which is good for us.

Q: Why is the light design such a crucial part of a dance performance?

A: Well, when you think about the difference between a live band and the DJ, what does a DJ have that the live band doesn't? Their stage presence is not typically them running around playing guitar singing a song. They're stationary at a DJ booth and they're typically not playing instruments. We have electronic artists that come up and play keyboards or drums sometimes, but the typical DJ format is a DJ booth. So how do you enhance that experience? What do they have they have? Their video. They have their light show, which really needs to both aurally and visually enhance that experience and translate the music into a more immersive experience.

I've got my family in town and last night my daughter wanted to see Arctic Monkeys. There, it's very clear that it's all about the music. It's all about the band. Even if you don't get a big light show, even if you don't get a big video experience, you're there. You know the song, you're singing along, the band is interacting with the crowd. The lead singer is animated and it's just not the same experience with the DJ. You have to enhance that experience for electronic dance music and that's part of what the whole vibe is. The production element and the dance music element kind of go hand in hand. It's a symbiotic relationship.

Q: I'm sure this is a hard question, but do you have a favorite light design that you've done?

A: You just asked me to pick which one of my children I love the most. It's really hard to say, but Lollapalooza this year looks fantastic. If I showed you the renderings and I stood next to the stage it's identical, so the team really pulled it off. I think when people leave the stage they will remember exactly what it looks like because it's not too deconstructed.

Q: Is there any performance or any artist you're most looking forward to seeing?

A: I enjoy more going with my family to see what they like to see. I get a lot more pleasure out of that. I've been in this industry 25-plus years. I wouldn't say I'm jaded, just more calloused to it and just kind of oblivious. I can walk through a festival property with the biggest band in the world playing on stage. And I'm just kind of on a mission with blinders on on my way to the production area. When I go with my kids it gives me this refreshing perspective. Tonight Bruno Mars is playing – normally if they weren't here, I would just stay at Perry's stage, but I'm going to go on a mission with them and see it through their eyes. Whatever they like to see, I like to see them seeing it.

I love Chicago. This is a great show in the middle of the city. It's one of those environments that's a very well-rounded festival experience. And it's just a pleasure to be here.

Q-and-A's are edited for length and clarity.