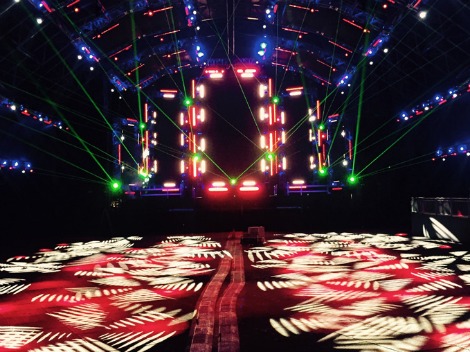 Everyone raves on and on about the DJs and dance-music acts at the Ultra Music Festival, as well they should. But much more than sick beats goes into creating your awesome, out-of-body party experience.

When the sun begins to set, there's nothing cooler than when the lights and lasers start really kicking in, and that's where the expertise of a guy named Steve Lieberman, of L.A.'s SJ Lighting, comes in. He's been The Dude for Ultra's lighting, design, production and audio needs since almost the very beginning, starting with the festival's second year, in 2000.

We decided to dig a little deeper into The Man Behind the Lights of Ultra, so here are nine things you didn't know about Steve Lieberman:

1. He started off small

My first eye-opening experience into the industry was in 1987, when I was 15 years old and working in a nightclub. I was washing glasses, filling juice bottles and mopping the floor. But eventually that evolved into an interest in hospitality design and the nightclub industry. And as the years went on, I would freelance in college with a buddy of mine who worked for a company in New York, building and installing nightclub systems. They were doing everything from Webster Hall to The Tunnel, Limelight, The Palladium &#150; all the big clubs in that early-'90s era. And that's kind of where I got my entry into the industry.

I've always been a fan of electronic music, and I like deep, underground tribal house the most, with some good vocals, something with a little soul. I'm 43 years old, so what I grew up listening to and what they're listening to now is a little bit different &#150; I was rooted in house music and freestyle back then, like Frankie Knuckles, and in my years in New York, it was Peter Rauhofer, Victor Calderone, Junior Vasquez, Danny Tenaglia. Those were all the DJs of that era &#150; some are still around and relevant, some aren't as much. But it was way before the big trance DJs became popular. I remember when I first did a show with Paul van Dyk, I had to look up who he was, and then the year after, he exploded.

3. He's also helped design many of your favorite Miami clubs

I designed LIV, I designed Story, I designed Arcadia and I designed Nocturnal, which was downtown. And I try to wash it out of my mind, but I designed Adore, which I think lasted a really long time, something like three or four months [laughs]. And back in the day I was highly involved with crobar in New York and Chicago, and was part of their team when they put in crobar Miami.

4.He gets downright philosophical about this stuff

When it comes to design, technology really is a secondary function, because it's about application and execution of a thought, a process, a concept, of geometry &#150; whatever you're trying to get across. The technology is just a tool in your toolbox to get it done.

5. He made the Carl Cox & Friends tent at Ultra in a shape other than a square or rectangle, for better acoustics

I always refer to it as The Beehive, because I took a hexagon &#150; which is a naturally appearing geometric shape, specifically from the bees. But I don't know if the audience notices that it's in a beehive shape.

6. He's risked his life for your party pleasure

It can be dangerous, yeah. One example: Many, many years ago, I did a show where my vendor sent me a distro with no feeder cable. So for laymen, that's basically giving me a box with nothing to plug into. And then he gave me the wrong end to plug into my lights. And the show was opening up in two hours, so I was hanging everything myself from 60 feet up in the air on a lift, and it was making me nauseous. And I remember literally cutting the ends off the cable, stripped the wires back, jammed the wires into a receptacle and taped it down.

7. You're lucky he knows what he's doing

We're hanging thousands of pounds over people's heads, so I would say that there's a lot of responsibility that goes with that. It's not just, "Hey-y-y, let's drink a couple beers and hang some motors up." We're actually using motion control motors, and moving them around over people's heads.

I have been a licensed pilot since November, and started flying in May. It's something that I've always wanted to do, and I finally got motivated to do it. I own a Piper Pathfinder, which is a 235-hp, four-seat, single-engine piston aircraft. It cruises at about 145 knots, which is about 165 mph. It's therapeutic for me &#150; when I'm up there, I don't think about anything else but flying, because … it's kind of critical.

9. He's not going to put out, so don't try anything funny