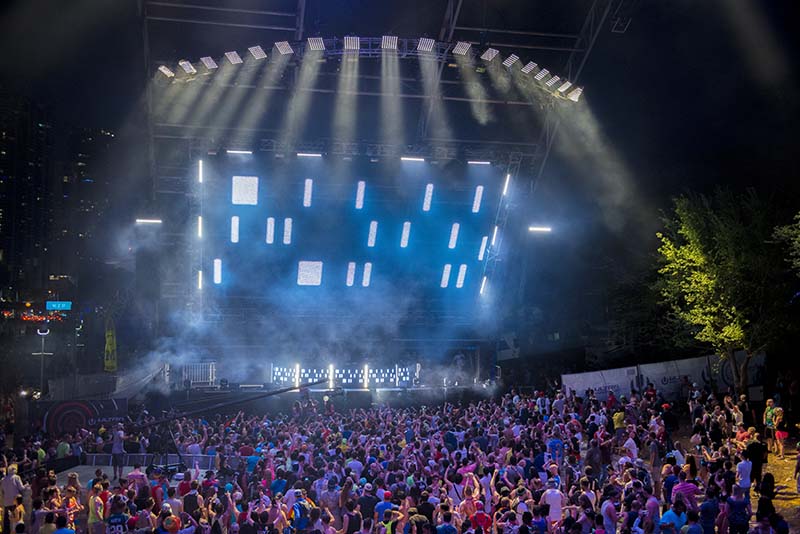 After 17 years, the Ultra Music Festival has become an institution in Miami. The 2015 event, held March 27-29, drew 150,000 from around the world with the world's top DJs spread over several stages. They play in front of what can best be described as "lighting sculptures," because the structure designs are so unique, massive and spread out over the complex that one can hardly refer to them as just a lighting rig. PLSN caught up with LD/production designer Steve Lieberman to speak about his designs.

Steve Lieberman at Ultra Music Festival 2015. Photo courtesy of Chauvet.Steve is the owner and principal of SJ Lighting. He comes up with ideas and drawings that depict the designs for live events and installs that come out of his company. There are another two people working on documentation and support as needed. SJ Lighting doesn't try to do it all at these festivals as Steve did in the early years because, as he says, "we would've had a mental breakdown already. But we still do the majority of the design work and have our hands in the overall fabrication of the event." He works hand in hand with production coordinator Ray Steinman and his team to ensure a fantastic look from every angle for this festival. Steve personally designed two of the stage/structures and worked with creative designer Richard Milstein as the fabricator of the main stage as well. "I am happy that the design team has grown along with this particular project over the years," he says. Each of these stages employs more than 200 moving lights and tons of LEDS. Of course, video elements are well represented everywhere.

LD Steve Ellison and designer Steve Lieberman at the Carl Cox Stage. Photo courtesy of Chauvet.Lieberman himself is still in love with his craft as evidenced by the fact that he enjoys running the lighting console for his own designs. This year, he manned the Carl Cox and friends stage, named after the legendary performer who was on the bill for his 11th year at Ultra. This half-moon enclosed structure was made of AG Light and Sound arched trusses and stretched from 120 feet wide to 200 feet in length. The entire audience was well immersed in light and surrounded by video elements mounted in moving, articulating pods. A 40-foot-tall screen stretched from behind the act to over the dance floor. Steve wanted the crowd to walk into this structure and be overwhelmed. He succeeded. This particular stage has close to 100 Martin MAC Vipers, which the designer has a particular fondness for. Of course, plenty of Sharpys, Atomic strobes and assorted eye candy products completed the look.

Ultra Music Festival 2015 photo of the Worldwide Stage courtesy of Chauvet ProfessionalSteve also was the sole designer on the Worldwide stage. Varying from his norm, the designer turned his AG arched roof sideways from its normal configuration. The bottom of the self-supporting curved structure starts upstage while the other end lands well behind the FOH mix position.. His desire was to create visual scenes that looked good from any angle in the audience.

With this design, the upstage video wall was actually hung at a raked angle. Curved trusses are hung with a huge number of Chauvet Professional Nexus Aw 7×7 panels. Lieberman can't say enough about the looks he gets from these Nexus fixtures, having just installed 90 of them at a nightclub in Vegas. "They're bright as hell and have a warm white color, so they look incandescent," he says. "They're individual pixel controlled and you can daisy-chain bunches of them with powerCON cables, as they pull no amps."

Patrick Dierson directed the lighting at the Ultra Music Festival Main Stage in 2015. Photo courtesy of Chauvet ProfessionalWhile Lieberman designed the Worldwide stage, Alex Ares was brought in as the lighting director to look after it. Alex was given quite the toy box of fixtures to play with besides the Nexus panels. Martin MAC Vipers and Elation Platinum Spot 35 Pro fixtures were the hard-edged fixtures used to cut thru the air.

On the Main Stage, Lieberman was happy to employ Patrick Dierson to direct and program the lighting. "I bring Patrick in once the design work is done," Lieberman says. "Of course he's a gifted programmer, but equally important is his work at human resources. He is the liaison for all the LD's that come in with the top acts. Once they know Patrick is in the house, the confidence factor among these touring guys is boosted. They have worked together before and Patrick knows what looks and cues they require for their show."

Another Main Stage moment at Ultra Music Festival 2015. Photo courtesy Chauvet Professional.The structure on the main stage was 200 feet wide and 88 feet high. The centerpiece of the rig was a set of concentric truss rings hung to resemble a chandelier of moving lights. It was crowned with a circular video wall around the perimeter. Underneath the ring, the design called for six individual LED screens hung portrait style and framed with box truss. These were arched at an angle to keep with the flow of the whole curved design. A row of Vari*Lite VL3500 Wash FX fixtures were under hung from those frames. Downstage and above the chandelier was a giant truss sculpture, which held more video tiles, shaped to show the Ultra logo.

Off to each side of the rings were three tiers of curved trusses stacked with lights. Under each line of curved truss hung curved LED walls. These tiers stretched from the floor to the ceiling. The 124 Chauvet Professional Legend 230SR Beam lights served as workhorses of this stage. They lit the air in glorious fans with their 2-degree beam spread, packing a good punch for a beam fixture that only uses a 230W Osram bulb.

Ultra Music Festival 2015 photo of the Resistance Stage courtesy of Chauvet ProfessionalAdding to the mix, Patrick had 50 Vari*Lite VL4000 spots, 74 Solaris Flares and a line of 168 Jarag panels, just to name a few. More than 150 LED pars were used just to tone the trusses on this stage. Co2 jets and flame jets added to the pizazz.

This year the producers of the event were looking for something new. They longed for some of the more strange art pieces one has grown accustomed to seeing at festivals such as Burning Man or Glastonbury. Ultra Music Festival did some research and came up with what was called the "Renaissance Stage." They brought in just what they were looking for with a structure built by Arcadia Spectacular.

Located in the walkway area of the festival stood what one could easily assume was a rocket ship from an old 1950s movie. This DJ booth was made from discarded military satellite dishes and included a spire that shot flames 30 feet in the air. The center held the DJ who was surrounded by Plexiglas sheets. A ring of moving lights encircled the tower to illuminate it.

The designers wished to add more texture to the piece. They wanted some video type element to the surface of the structure, but they didn't really wish to use LED displays or any video tiles for that matter. They were looking for some lower-res artsy scenario to do the job. They decided to go with Chauvet Professional EPIX Tile 2.0 and EPIX 2.0 Strips to create a different image. These static tri-colored LED fixtures were pixel-mapped using Art-Net, so they could have been controlled a number of ways. They chose to use an Avo console and an AI media server to feed images to the EPIX.

As another year of Ultra passes, Steve and his team are already looking down the pike at next year, as are all the attendees who will undoubtedly return next March to Miami's Bayfront Park to do it again.